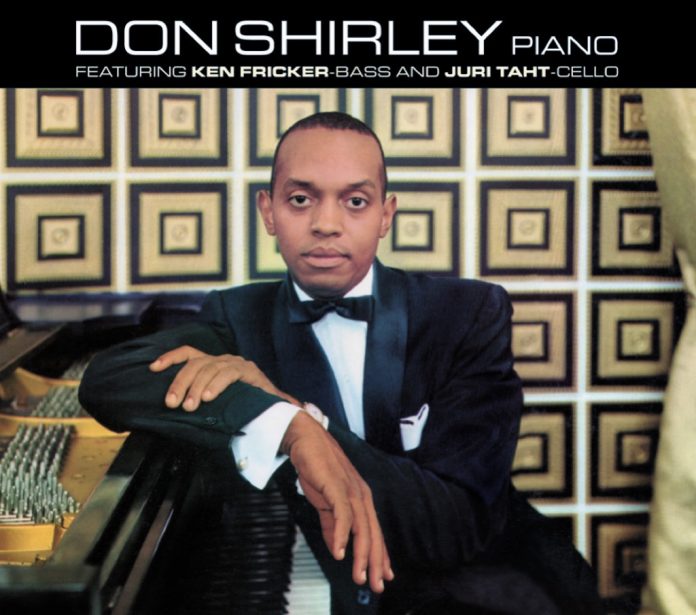 This CD is constructed from two LPs released originally in 1959/60 on the Audio Fidelity and Cadence labels. They present Shirley as a pianist who plays in a hybrid classical/jazz fashion that is entirely unique to him. The material consists of popular standards, two folk songs and a negro spiritual.

Nothing is as it seems however; although Shirley improvises and presents occasional jazz flourishes almost everything he plays is as though he were playing a classical piano concerto. On some selections here he is percussive, playing in a jazz manner but mostly he is offering delicate and stylised lines in the way a concert pianist would approach them.

He chose for his accompaniment on both LPs Ken Fricker on double bass and Juri Taht on cello. Three tracks have the percussive tumbadora although no musician is listed and neither is the French horn player credited although he or she appears on six tracks. What we get though is a very personal part-jazz, part-classical, part-folk music reading of some popular standards.

One particular highlight is Water Boy, listed as an “old prison song” and played like a blues-inflected folk opus. Bass and cello set it up and Shirley goes down into the Delta for some old-style blues licks before refining his lines into his usual light, delicate stylings. Strident bass lines enter late on to provide further confusion but the overall effect is impressive and musically satisfying.

The three musicians composed Blues For Basses and this is the most straightahead, basic blues performance. A bass ostinato backs the pianist straight down the line as he improvises his way through it. Happy Talk receives a similar treatment. A Jamaican folk song is played straight in a folksy manner and Freedom is given full spiritual licks.

Shirley trained as a classical pianist and but for the restrictive and shameful racist attitudes of his early years he would have continued along that path. This personal mix of jazz, classical and blues with further overtones presents a distinctive blend of personal music that will delight folks who have open ears and are not locked into one particular type of music.

Discography
One For My Baby; Satin Doll; Somebody Loves Me; Nearness Of You; Easy Living; The Way You Kook Tonight; Blues For Basses; Happy Talk; This Nearly Was Mine; Dites-Moi; I Remember April; Black Is The Colour; Water Boy; Where’s My Bess; In A Moorish Market Place; Blue Skies; Adieu Madraz; When Your Lover Has Gone; Tribute To Billie Holiday, Trav’lin Light, Don’t Explain, Easy Living, God Bless The Child; By Myself/ I Know Where I’m Going; Freedom/I’m On My Way; I Got Rhythm (73.29)
Shirley (p); Ken Fricker (b); Juri That (clo) with uncredited French horn and tumbadora players. NYC, February 1959 & 11 & 13 July 1960.
Blue Moon CD 899

Gordon Jack - 06 October 2021
I never thought I would say this about any recording from the great Stan Getz but these insignificant trifles are unlikely to be of interest to the well-informed readers...