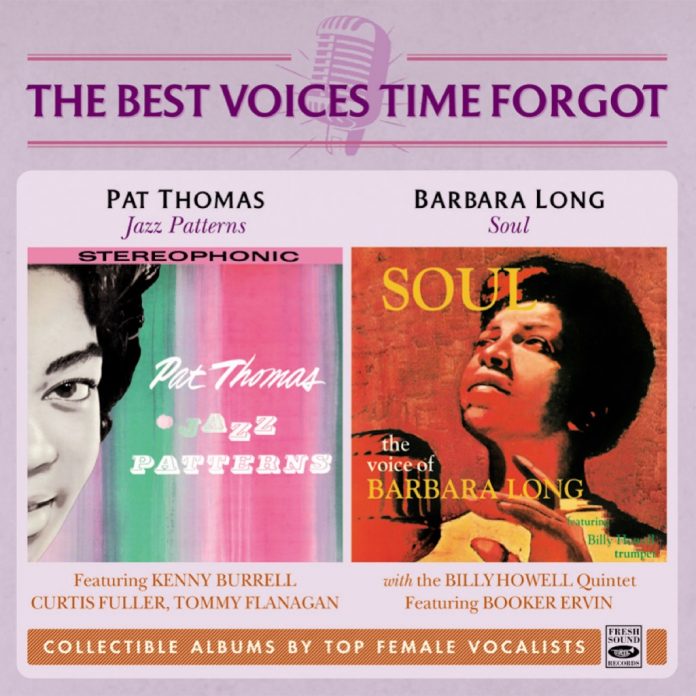 This important series from Fresh Sound has brought back several very good although long-forgotten singers of classic pop. This particular example stands out for me because the two singers heard here are much more jazz-oriented.

Pat Thomas is very good indeed, ably demonstrating why she was very popular on the Chicago jazz scene of the late 1950s/early 1960s. Hearing the first of these resurrected albums, Jazz Patterns, it is hard to believe that Thomas was only 22 years old when this was recorded. Her vocal sound is full and rich, and she brings mature understanding to the lyrics of a nice selection of songs. Her accompanists are attuned to her vocal style, proving appropriate backing with occasional solos, mainly from Teddy Charles on vibraphone and Booker Little on trumpet.

A little older, Barbara Long was 29 years old when she made Soul. She, too, sang in Chicago’s jazz clubs, including a spell with a trio led by tenor saxophonist Johnny Griffin at the city’s Cotton Club.

Her first recordings appear to have been some tracks on an album by alto saxophonist Herb Geller and this led to a session for Savoy Records, which resulted in her first and only album. On this she is accompanied by trumpeter Billy Howell’s quintet. Another Chicagoan, he also wrote the arrangements, which effectively highlight the vocalist. Also present is tenor saxophonist Booker Ervin, who is given solo space on The Trolley Song and When You’re Smiling. As the album’s title suggests, there is in Long’s soulful singing a hint of the blues.

This release is a very interesting, enjoyable and valuable addition to Jordi Pujol’s treasure trove of singers from the past. After an Internet search, I see that Pat Thomas died in 1992, but there is scant information on what became of Barbara Long.

Hugh Rainey - 18 December 2019
The group's name cheerfully confirms its dedication to traditional New Orleans jazz, though not exclusively to the strict erstwhile purist style epitomised by Bunk Johnson and George Lewis. The repertoire...