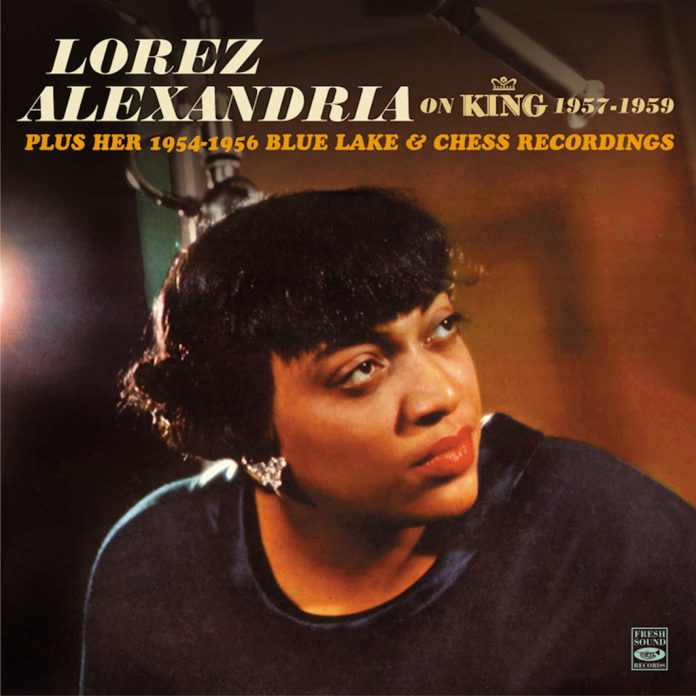 Lorez Alexandria began her professional career singing with King Fleming’s small group, a band that gained immeasurably in popularity through her presence. Fleming made his first recording at his own expense and these two tracks, Williams’ Blues and One O’Clock Jump, released on Blue Lake, are included here as are Please Come Back and Stompin’ At The Savoy, recorded by Chess. After a few months, Alexandria began her career as a single but was soon alternating between her solo work and singing with Fleming as can heard on the other 22 tracks on CD1.

Extensive notes by Jordi Pujol includes details of his aural detective work on the material heard on CD2. This centres on the instrumental playing that was recorded first, the intention being that Frances Faye would then record vocals for the US market while other language lyrics could be added by singers overseas. King Records had then acquired the masters and Alexandria recorded the tracks heard here. Thus she is heard singing with some of the best jazz and session musicians around at that (or any other) time. Naming just a few of the sidemen heard on CD2 provides a flavour: Pete Candoli, Maynard Ferguson, Bernie Glow, Urbie Green, Richie Kamuca, Marty Paich, Shorty Rogers, Frank Rosolino, Nick Travis. The personnel details Pujol has carefully determined for these tracks are all included in the liner.

Although she began singing in church, Alexandria stated in interviews that she chose not to follow the trend of adapting gospel style to popular music declaring that she was “always an introvert”. Indeed, although her vocal sound is rich and full-bodied, she brings an often gentle understanding to the songs she sings, interpreting lyrics with sensitivity.

All the tracks on CD1 are with Fleming and with the exception of the four early singles all come from 1957. At this time, she was only 28 years old yet even here her maturity and individuality are apparent as she steers a different course from that more forceful path attending the segueing of gospel into soul and R&B. The 10 tracks from the album dedicated to Lester Young are interesting in that while all are songs he recorded not all have lyrics. On these, Alexandria scats and the benefit of hindsight raises the thought that vocalese might have been a better way. Even so, it works well.

On the second CD Frank Hunter and Russ Garcia share arranger credits for 14 of the 23 tracks, and it might be reasonable to assume that accompanying leaders also arranged some tracks: Richard Wess (two), Al Belletto (two), Johnny Richards (one), Ralph Sharon (three), Ralph Burns (one). Although these recording are from only two years later, it is clear that the singer had grown both in maturity and in vocal skill. There are several instrumental solos, notably from Garcia’s “Four Trombone Band”, the four being Ferguson, Rosolino, Herbie Harper and Tommy Pederson. As indicated, the instrumental tracks already existed and Alexandria had to mould her singing to suit. She does this admirably and nowhere is there any hint that these performances were not a collective undertaking.

Discography
CD1: [This Is Lorez] I Thought About You; I’m Glad There Is You; Thou Swell; Snow Storm; Penthouse Serenade; And There You Are; The Sky Is Crying; You Make Me Feel So Young; I’m Making Believe, Baltimore Oriole; You Stepped Out Of A Dream; Necessity [Lorez Sings Pres] Fine And Dandy; Fooling Myself; D.B. Blues; You’re Driving Me Crazy; Easy Living; Polka Dots And Moonbeams; This Year’s Kisses; There Will Never Be Another You; No Eyes Blues; Jumpin’ With Symphony Sid [Blue Lake and Chess Recordings] Williams’ Blues, One O’Clock Jump; Please Come Back; Stompin’ At The Savoy (75.24)
CD2 [The Band Swings-Lorez Sings] You’re My Thrill; Don’t Blame Me; Ain’t Misbehavin’; What Is This Thing Called Love; Dancing On The Ceiling; Love Is Just Around The Corner; I’m Gonna Sit Right Down And Write Myself A Letter; Just You, Just Me; All The Things You Are; The Thrill Is Gone; My Baby Just Cares For Me [Standards With A Slight Touch Of Jazz] Just One Of Those Things; Then I’ll Be Tired Of You; Lush Life; Sometimes I’m Happy; Long Ago And Far Away; But Beautiful; I’m Beginning To See The Light; I Can’t Believe That You’re In Love With Me, Spring Is Here; Angel Eyes; Better Luck Next Time; I Didn’t Know What Times It Was (65.09)
Alexander (v) with various small groups (King Fleming, Ralph Sharon, Ralph Burns) and orchestras (Frank Hunter, Russ Garcia, Richard Wess, Johnny Richards). Chicago, LA, NYC, 1954-1959.
Fresh Sound FSR-CD 979

Fred Grand - 23 April 2022
Perhaps rather lazily I tend to think of guitarist Jon Eberson (b.1953) as a player and composer whose career has shadowed that of compatriot Terje Rypdal. Yet while echoes...