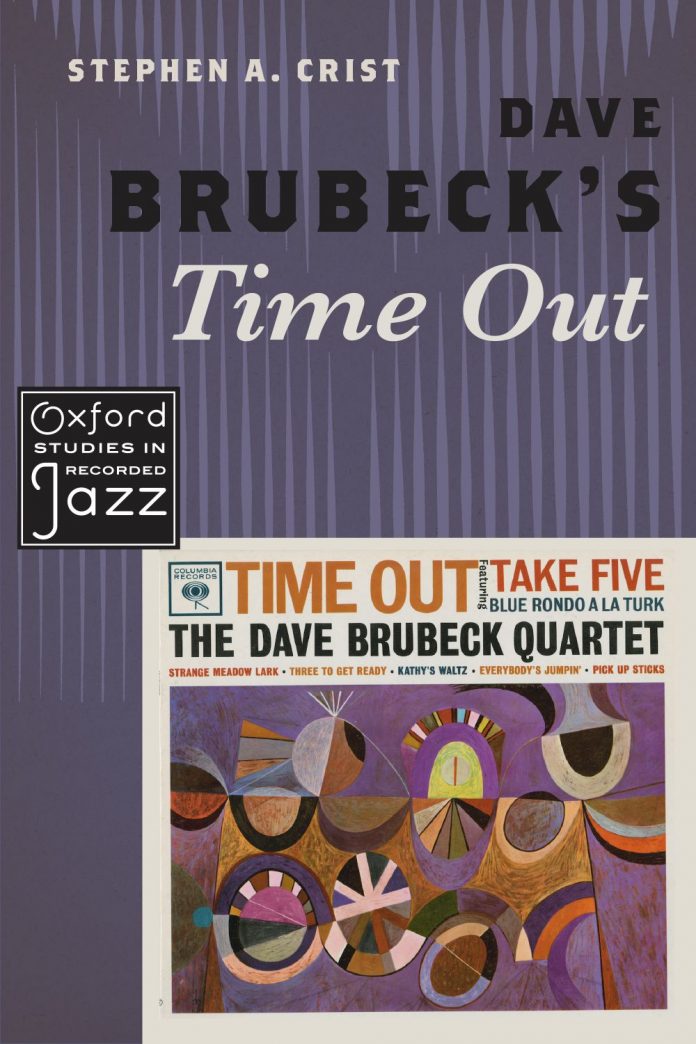 There’s a small host of books on Brubeck which lead to incestuous confusion by all using the word “Time” in their titles – concurrently with this one is A Life In Time by Phillip Clark, reviewed in April by Barry Witherden. In his £25 book Mr Clark says he “tells one of the last untold stories of jazz, unearthing the secret history of Take Five and many hitherto unknown aspects of Brubeck’s early career”, which is pretty much what Mr Crist claims for his splendid paperback. I’m a virgin here for this is the first book on the amiable Armenian that I’ve lifted my skirts to (and Dave was actually born in Concord, Ca.).

Although the title references Time Out, and others try to hang their hat on Paul’s hit tune, Professor Crist also provides a history of the quartet from its beginning. In fact, happily, he takes every opportunity to digress to wider things Brubeck, and the result is a happy one indeed, although the less literate musically may find themselves skipping the multitude of musical notations. This handicap shouldn’t deter the less erudite reader, for the results of Crist’s exhaustive research is easily read without the extra knowledge. It is a long time since such a rewarding book about jazz has appeared at such a modest cost.

In the early days of his fame Brubeck’s polytonality and odd rhythms were always the elephant in the room, serving to detract attention from the gentle, civilised and imaginative improvisations of Paul Desmond.

Dave claimed that he began playing “atonal jazz” in 1942 and that he was inspired by a variety of rhythms, such as those from pumps and other mechanical sources. After having the field to himself for some time he declared “If I live to be an old man, I’ll never exhaust the polyrhythmic, polytonal possibilities”. He did. When he died in December 2012 he was a day short of 92 and he was still hacking away at his poly-potential.

Was Time Out worth all the fuss? It certainly legitimised Brubeck’s claim to have created a by then securely established jazz idiom, although his agent no longer needed reassurance after Dave’s remark to him in 1955 that ”I do not wish to make jazz my career unless I see the possibilities of becoming a top name in the country”. To this end he became a master of self-publicity, with the result that the album that included Take Five and Blue Rondo A La Turk vied with Miles Davis’s Kind Of Blue when measuring their sales in millions. Both albums electrified a massive audience that previously had paid no attention to any kind of jazz.

Most of the material for the album was tried out in concert, at that time regarded by the quartet as far more inspiration-inducing than the studio. But the idea to record the album live was swiftly abandoned since it was soon realised that the complexity of the material meant that many takes would be needed. In the event, recording time over three days took 14 hours as opposed to the nine hours required by Miles’s Kind Of Blue in the same year.

I established a pleasing acquaintance with Brubeck at his early concerts which then drifted away. But for each of the next 40 years I was sent a Christmas card signed by Dave and his charming and industrious wife Iola.

Professor Crist has written 10 major chapters and divided each with a most useful series of explanatory headings. He has compiled a massive and useful bibliography with, at a guess, about 400 references and his musically annotated examples are heading up to about 100.

I’m sure that this most worthy book will fulfil the needs of Brubeck students and neophytes. Both groups would be diverted by this beautifully filmed and recorded seven-minute Take Five by the classic quartet.

Fred Grand - 06 March 2022
Parker first came to my attention in the mid-90s as a mainstays of the burgeoning Chicago post-rock scene. He was a founding member of Isotope 217 and Tortoise, groups...

Jazz Journal - 28 May 2020
It is something of an undertaking to translate and assimilate in one breath, so to speak, the highly knowledgeable and well-informed criticisms and com­ments of a writer of the...