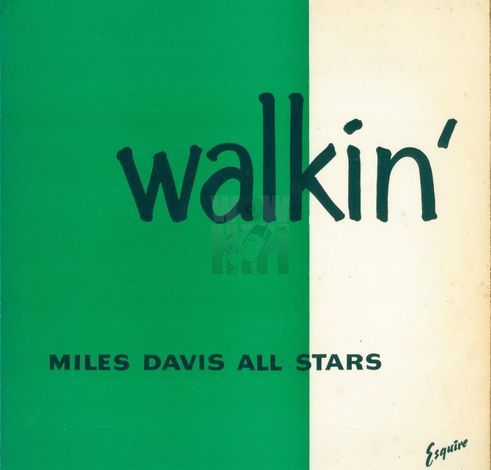 A review by Mike Shera of a Miles Davis classic. First published in Jazz Journal August 1960

This record contains some of the finest modern jazz ever put on record. The period was a particularly good one for Miles Davis. Although he had not yet won the public acclaim which was to follow his 1955 Newport appearance, he had successfully overcome most of the technical troubles which had marred his earlier work.

Also, as Ira Gitler points out in the liner note, the Sextet session was in the nature of a comeback for Lucky Thompson. His playing on both “Walkin’ ” and “Blue ‘N Boogie” is superb, his solo on the latter, with Davis and Johnson riffing behind him, being perhaps the highspot of the whole album.

During 1954, Horace Silver, Percy Heath and Kenny Clarke formed what was virtually the house rhythm section for Prestige, recording on several Miles Davis dates as well as on sessions by Art Farmer and Milt Jackson. It would be difficult to find a better section. Clarke’s brushwork on Side Two could well be used as a model by any aspiring drummer and his stickwork on Side One is the essence of good taste and swing – never obtrusive, yet always coming in at exactly the right place to give the solo extra impetus. Percy Heath fits perfectly with Clarke, and his tone is something to marvel at – so full and warm. Horace Silver, although he is the weakest soloist on the record (which is like saying Freddie Trueman was the worst fast bowler in the Lords Test match), is more than adequate in the rhythm section.

The first side, by the Sextet, consists of two blues – medium tempo (“Walkin’ “) and fast (“Blue ‘N Boogie”). The second side contains one title, “Love Me Or Leave Me”, which has not previously appeared in this country. It is taken at fast tempo, has solos by everyone, and is well up to the high standard of the more familiar titles. “You Don’t Know What Love Is” is a feature for Miles playing his now familiar, virtually “as written”, interpretation of a ballad. “Solar” is a slow-medium tune based on the chords of “How High the Moon”, with some especially fine brushwork by Kenny Clarke.

This is a record which few jazz enthusiasts can afford to be without.

I very much enjoyed Icelander Bjarni's 2018 Tenging – a quintet date distinguished by subtle group interaction realised through a pleasing diversity of...

Although well known in Toronto from the 1950s, it was two decades before Ed Bickert’s reputation spread throughout Canada. It was yet another decade...

More than a half-century after his death, Nat King Cole’s popularity remains extraordinarily high, even though the world of popular music today is very...