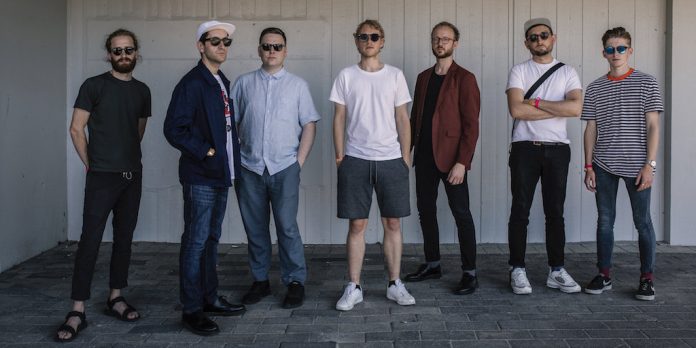 With the release of their latest album Broadway 2018, a win at the British Jazz Awards 2018 for Best Small Group and two sold-out headline shows at Ronnie Scott’s, the past couple of years have been a big success for the Kansas Smitty’s House Band. Presented once again by Ronnie Scott’s, this gig for 2019 EFG London Jazz Festival gave the band a chance to debut some new music as well as reel off some much-loved classics.

After a brief supporting set in which the RP Quartet evoked the spirit of the Hot Club de France with warm gypsy-jazz renditions of classics by Mingus and Monk, the Smitty’s band were on. Stepping on stage bathed in light and surrounded by an aura of dry ice, it’s obvious that they have their style down to a T.

Giacomo Smith leads a tight horn troupe comprising himself on alto saxophone and clarinets, Alec Harper on tenor saxophone and Pete Horsfall on trumpet; You only need to hear Smith’s swooning alto solos à la Johnny Hodges, or Horsfall’s wah-wah technique to know that swing is really what these guys do best. This was well balanced with a couple of impromptu piano trios, giving Joe Webb’s light-fingered improvisations some time in the spotlight.

On Cranes, a sombre tune from Broadway 2018 with a beautifully simple pentatonic melody, the band was joined by guest trumpeter Keyon Harrold. His playing is well rounded, bold but not overbearing. Despite his own artistic direction leading him towards more hip-hop and R&B oriented styles, Harrold hits all the right notes with the rest of the band: sharp solos featuring vocal growls, and bent blues inflections.

Seeing the Kansas Smitty’s House Band huddled together on the stage of Alexandra Palace Theatre you get the impression that all of this would be a thousand times more enjoyable within the intimate setting of their home turf – with its low ceiling and limited capacity. But they don’t let this hinder them. You can take the band out of Kansas Smitty’s but you can’t take Kansas Smitty’s out of the band. These seven jazzmen are proof of jazz’s uncompromising stylishness.

Down For The Count: Voices Of Swing