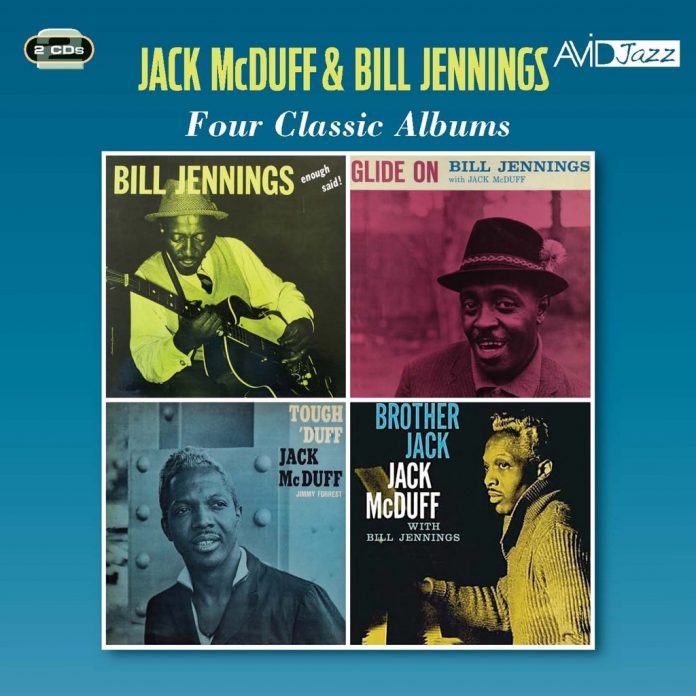 This collection features two albums by guitarist Bill Jennings as leader (Enough Said! and Glide On), which I reviewed as recently as 25 April 2019 under the collective title Bill Jennings: The Complete Prestige 1959-1960. The two remaining albums (Tough ’Duff and Brother Jack) feature organist Jack McDuff as leader but with a fairly significant contribution by Jennings on Brother Jack. In turn, McDuff played a noticeable role (perhaps too noticeable at times) in supporting Jennings as leader on both his albums.

Brother Jack McDuff was was born in Champaign, Illinois in September 1926. He died January 2001 after a long and relatively successful career as organist (notably Hammond), pianist and sometimes bass player. He was self-taught and served his time playing the Chicago clubs until the late 50s. McDuff had any eye for talent, employing both Roland Kirk and George Benson at different times in his touring trio. McDuff clearly drew inspiration from Jimmy Smith but with less flamboyance.

McDuff’s connection with Prestige records began when he was called in to provide Hammond support to saxophonist Willis Jackson on Please Mr Jackson and Cool ’Gator. That led to Prestige offering him a record deal as leader and Brother Jack with Bill Jennings was his first solo release.

Of Bill Jennings, McDuff said that every time he played a note, he would like it to be with Bill Jennings. Jennings, however, is absent on Tough ’Duff, as is any trace of guitar. The presence of McDuff on both of Jennings’ albums caused Jennings to be labelled an “organist’s guitarist”. This was a term which he disliked, preferring he said “to play like horns”. In fact Jennings was a frustrated saxophonist, so much so that Charlie Parker, Herschel Evans, James Moody and Sonny Stitt are cited by Jennings as his major influences. He had little time for other guitarists.

There is no doubt that McDuff became the more famous of the two. Just as Jennings benefited from the interest in virtuoso guitar created by Charlie Christian, McDuff also gained from the interest in jazz and blues organ created by Jimmy Smith. In some respects there probably was more recording and touring opportunity at the time for McDuff’s light to shine brighter and Jenning’s career was not helped by the loss of a finger. From all accounts McDuff was also a more forceful and driven character than Jennings. Notwithstanding that, both Jennings and McDuff were each masters of their respective games.

Whilst understated compared to some of their contemporaries there is much to like about all four albums. If you like the Hammond and you like articulate, thoughtful and relaxed guitar playing then this collection is definitely worth a listen. The legacy of their collaborations together is not vast, but what little exists shows that they made a great partnership.

John Adcock - 17 July 2019
These young guns all graduated from London’s Royal Academy of Music in 2016. During their studies, they played together and knocked around a lot of different ideas, honing and...