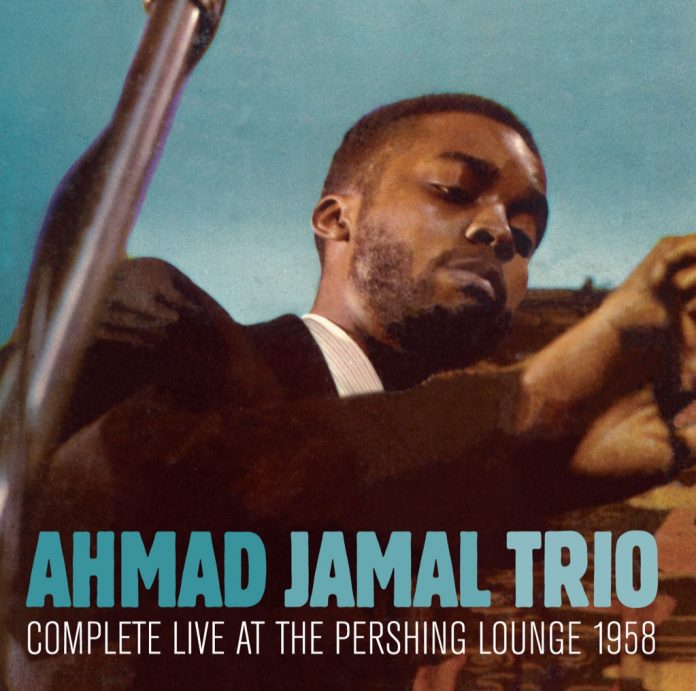 The young and comparatively unknown Ahmad Jamal’s “live” recordings at the Pershing Lounge at the Pershing Hotel on Chicago’s South Side, and the Spotlight Club in Washington, DC marked a significant step forward in his career. Following the LP releases of these engagements, the Jamal trio ranked No. 13 on Billboard’s Best Selling Artists on LP, with Erroll Garner, one of Jamal’s heroes (along with Art Tatum and Phineas Newborn) at No.24. The Pershing performances, personally selected by Jamal, were eventually to reach Billboard’s No. 3 on its “Hot 100” chart.

They have been reissued many times, most recently on the Jazz Dynamics label as the Ahmad Jamal Trio with Israel Crosby & Vernel Fournier: The Classic 1958-1962 Recordings. I awarded it five stars in my November 2015 JJ review. My favourite tracks as examples of the trio’s inventiveness and rapport were But Not For Me, My Funny Valentine, and The Surrey With The Fringe On Top.

This new release is minus three tracks – Secret Love, Taking A Chance On Love and Soft Winds – that are on the Jazz Dynamics anthology, but includes two additional versions of Poinciana, one edited, the other an earlier studio version. These allegedly “complete” performances include the original liner notes from the two Pershing LPs – But Not For Me and Jamal At The Pershing – by Jack Tracy and Sid McCoy (which are also included in the more attractive Jazz Dynamics set).

I have little to add to my earlier review, except to say that the “bonus” Poinciana takes are valuable additions to Jamal’s discography. Together with Erroll Garner’s 1955 Concert By The Sea (now available in its entirety and improved sound), the Pershing recordings can be recommended unreservedly as joyous and hugely rewarding music making – to the obvious delight of an attentive and well-mannered audience. Re-listening to the entire album, I must also flag the gentle and dazzling performance of All The Things You Are and a pulsating I’ll Remember April, with Crosby and Fournier anticipating and embellishing Jamal’s dancing rendition of a jazz classic.

In The Penguin Guide To Jazz Recordings (aka The Bible), Messrs Cook and Morton put the Pershing recordings in their “Core Collection” category, and noted that “Jamal’s technique has scarcely changed over the years and remains closer to Erroll Garner than to anyone else, concentrating on fragile textures and calligraphic melodic statements (the qualities that attracted Miles Davis) rather than the propulsive logic of bebop piano”. I wish I’d said that.

Discography
But Not For Me; The Surrey With The Fringe On Top; Moonlight In Vermont; Music! Music! Music!; There Is No Greater Love; Poinciana; Woody’N You; What’s New?; Too Late Now; All The Things You Are; Cherokee; It Might As Well Be Spring; I’ll Remember April; My Funny Valentine; Gone With The Wind; Billy Boy; It’s You Or No One; They Can’t Take That Away From Me; Poor Butterfly; Poinciana* [Single version]; Poinciana** [1955 Studio version] (76.34)
Jamal (p); Israel Crosby (b); Vernel Fournier (d). Live at the Pershing Lounge, Chicago, 16 & 17 January 1958. *Bonus track – edited version of the Pershing’s Poinciana originally issued on a single 45 rpm disc. **Ray Crawford (g) replaces Fournier. New York, 25 October 1955.
State Of Art 81260