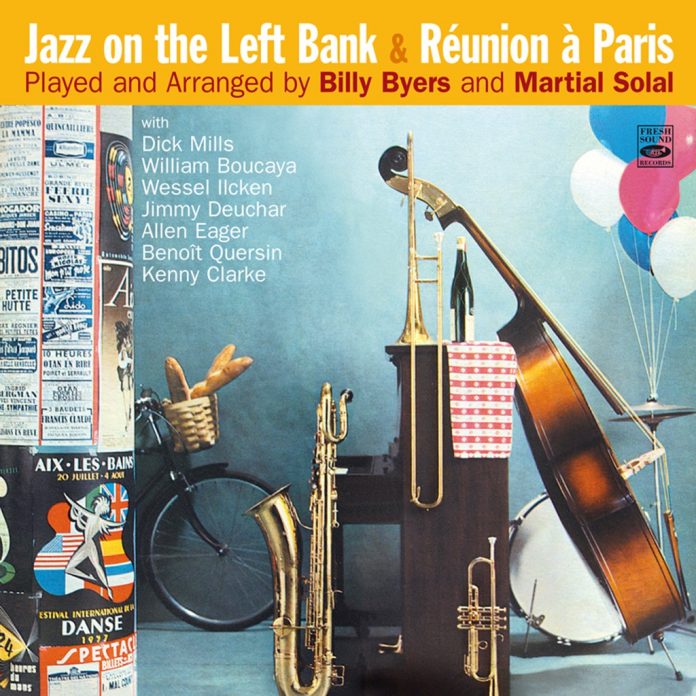 It’s good to hear Billy Byers doing a fair bit of soloing, and he’s revealed as a very close disciple of Bill Harris. He’s also the author of the most swinging charts here – his arranging talents have never been in question. The other outstanding brassman is predictably Jimmy Deuchar. And here’s a magnificent chance to hear the most obscure of the great swingers one more time – the unique Allen Eager on tenor. I’ve expressed admiration before in these pages for the fine baritone of Mr Boucaya.

Fresh Sounds’ recent issues have shown Martial Solal to have been one of the most gifted French arrangers and pianists and this album is further confirmation. His nimble bop solos retain their freshness, unlike some of his charts which have inevitably dated over more than 60 years. Kenny Clarke is as crisp and immaculate on the (2) sides and on the rest the Dutch Wessel Ilcken is impressively inspired. Dick Mills (who he?) is a delicate soloist not at all out of place on these sides, which confirm how good French record companies were at putting together great record sessions more or less at the drop of a hat.

This session is as good but different from the contemporary The Herdsmen Blow In Paris, that wonderful album blessed by a brilliant team of soloists headed up by Bill Perkins and Ralph Burns. The arrangements on that were sketchy and designed for blowing. These are much more organised and tidy.

One of the best tracks is the long Buyer’s Blues. I’ve heard it under another title, but one which now escapes my poor old brain. Eager gets a nice chance to stretch out on this slow blues and you’ll tick off the Harris twists and turns one by one as they come forth from Billy. This was the sort of blues tempo Joe Newman loved, and Deuchar’s full-toned solo brings echoes of Joe. Good piano throughout this long number.

Wif Stenger - 15 June 2020
Solo saxophone is a daunting proposition, but some of my most transcendental jazz experiences have been one-man sets by Anthony Braxton, Steve Lacy and Evan Parker. Felice Clemente is...