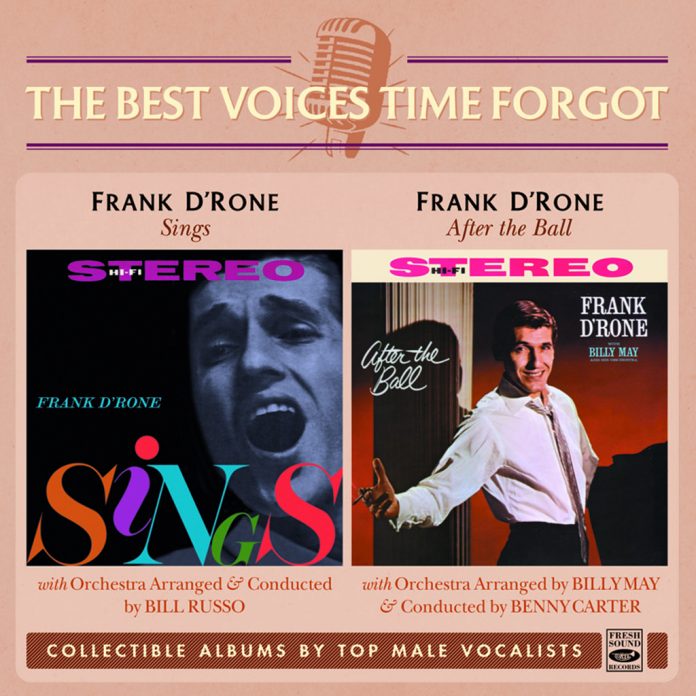 Frank D’Rone is a name that rarely crops up, but it’s worth pointing out the high esteem in which he was regarded. The original sleeve notes to Frank D’Rone Sings were written by Nat King Cole, who first heard him at Dante’s Inferno club in Chicago and was evidently knocked out by what he heard. D’Rone stayed at Dante’s for 14 months and was the man to see, as witnessed by visitors that included fellow singers Ella Fitzgerald, Johnny Mathis, June Christy and Frank Sinatra, who requested he should appear in the lounge whenever Sinatra was in Las Vegas or Atlantic City.

As well as this, when he was headlining the world famous Copacabana, Tony Bennett took over the microphone on opening night and told the audience, “A few years back, Nat ‘King’ Cole said that Frank D’Rone was the finest singer around. Tonight he has proved that Nat was right!” Now that Jordi Pujol has issued this CD on his Fresh Sounds label, we’re given the opportunity to hear what the fuss was all about.

A fine singer with an individual sound without being stylised, he has accurate pitch and good articulation, interprets lyrics sensitively and appropriately and holds a note well – noticeable on slower tracks like Yesterdays or Spring Is Here.

There is a good selection of material, mainly established standards but with a number of less familiar songs, and a variety of accompanying formats. The tracks on After The Ball, from 1960, have swinging orchestral arrangements by Billy May and Benny Carter, with a host of top session musicians, but it’s the sides from Sings (1959) that really have a jazz feel. Septet arrangements by Dick Marx, some orchestral by Bill Russo and five tracks with a quintet that features Bud Shank, one of which, Everything Happens To Me (no vocal album is complete without a Matt Dennis number), has some beautiful fill-ins by the altoist. Russo’s arrangements are interesting for their rich background texture created by five trombones.

Fans of what used to be referred to in the trade as “quality vocals” will find this to be right up their street!

Discography
Love And The Weather; Yesterdays; I Could Write A Book; Everything Happens To Me;My Foolish Heart; Fascinating Rhythm; The Moon Is Blue; Sophisticated Lady; Joey, Joey, Joey; Spring Is Here; The Way You Look Tonight; After The Ball; Oh! Look At Me Now; My Melancholy Baby; You’d Be So Nice To Come Home To; Now I Know; Let Me Love You; Will You Still Be Mine; Warm All Over; It’s You Or No One; Two Sleepy People; Why Can’t This Night Go On Forever; We’ll Be Together Again (53.47)
D’Rone (v) with:
Septet arranged by Dick Marx; orchestra arr. & cond. by Bill Russo with five trombones; Kenny Soderblom (o, gtr); John Frigo (b); Chicago, February 1959.
Quintet with Bud Shank (f, as); Barney Kessel (g); Jimmy Rowles (p); Red Mitchell (b); Shelly Manne (d). Hollywood, March 1959.
Orchestra arr. Billy May, cond. Benny Carter. Hollywood, February 8, 9 & 10, 1960.
Fresh Sounds FSR V201 CD

François van de Linde - 19 October 2020
Although many musicians strictly adhere to its tried-and-tested patterns, gypsy or manouche jazz has actually been cross-border from the start. After all, the mutual influence of pioneer Django Reinhardt...