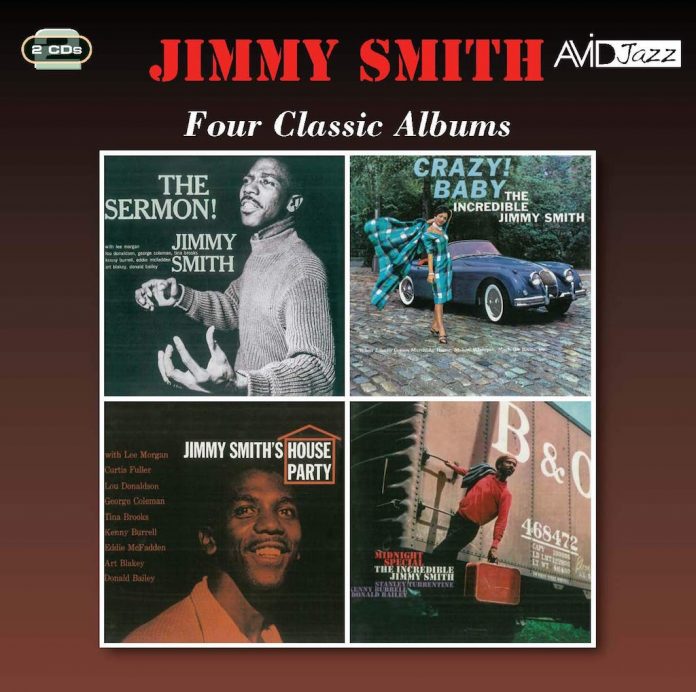 Jimmy Smith’s crossover popularity came during his time with Verve, which began in 1962, but it was his earlier spell with Blue Note where he first made his impact. And what an impact it was. Any doubts about his importance will vanish on hearing random excerpts from this period, which appear on the four classic albums gathered together on these two CDs.

Building stylistically on Horace Silver’s jazz-funk, Smith and his sidemen made around a dozen albums for Alfred Lion at Blue Note. At the time of the first session Smith was about 30 (his year of birth, 1925, is sometimes stated as 1928), and he is clearly an immensely talented player. His key associates on these sessions were drummer Bailey and guitarists McFadden, Warren and Burrell. The music created – call it jazz-funk, call it soul – was  based firmly on the blues and this resonated with audiences.

During these years, the core trio was augmented by horns, particularly Donaldson, Coleman, Turrentine and Morgan. The last named is in excellent form and takes several long and inventive solos. However, although the horn soloists are all very good, Smith is the key figure proving his standing not only as a soloist but also as the driving force of the rhythm section. The 1960s over, Smith was by no means done, reuniting with Turrentine and Burrell for 1990’s Fourmost, 1993’s The Master and 2004’s Legacy, teaming up on the last of these with fellow B3 player (and fan) Joey DeFrancesco. In recent years there has been a resurgence of the B3’s popularity but Smith remains the father figure and this release vividly demonstrates why this is justifiably so.

Fred Grand - 11 October 2019
It would be more than a little disingenuous to describe Saft’s stellar quartet as new entrants to the spiritual jazz revival, though they undoubtedly draw heavy inspiration from that...