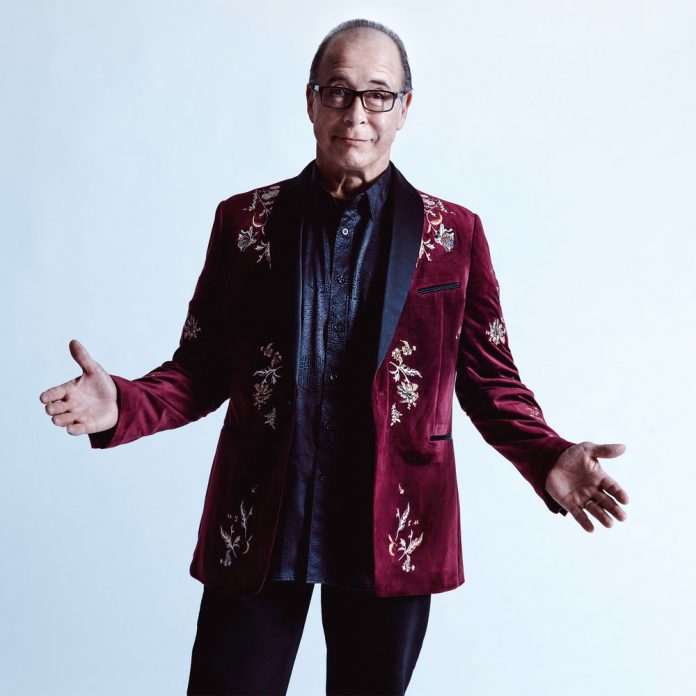 Half a century on, the R&B warhorse that is Tower of Power is going strong, its hallmark horn sound and repertoire still impressive and its charismatic new young singer drawing new audiences. Tower of Power bring their recharged line-up to Manchester tonight and London tomorrow.

They are riding high after scoring their first Billboard No. 1s as their latest album, Soul Side Of Town, topped the Jazz Albums and Contemporary Jazz Albums charts last year.

Though one of the band’s early hits warned Don’t Change Horses (In The Middle Of A Stream), they were forced to do just that midway through recording the last album. Lead singer Ray Greene left to join cross-town rivals and sometime collaborators Santana and was replaced by Marcus Scott. Judging by crowd reactions, that has turned out to be a stroke of luck.

Scott is a vocal and physical acrobat, a slick Memphis showman and rubber-legged dancer who charmed the mostly-young crowd at the Pori Jazz Festival in Finland, leaping off the stage to join their outdoor dance party.

Don’t Change Horses dates back 45 years to the band’s last album with radio hits, Back To Oakland. It also featured Squib Cakes, a jazzy Steely Dan-esque instrumental that has been sampled by electronic and hip-hop acts such as the Orb, the Brand New Heavies and De La Soul.

Onstage, Squib Cakes offers a showcase for soloists to stretch out. At Pori, Adolfo Acosta, formerly of Maynard Ferguson’s band, delivered a dazzling Freddie Hubbard-like flugelhorn solo. That was followed by a rollicking Hammond solo from Roger Smith, who was taught to play the B-3 by Jimmy McGriff. Tenorman Tom Politzer also fired up the audience with incendiary solos.

As these connections suggest, TOP is a musical melting pot, reflecting its roots in Oakland, California, one of America’s most ethnically diverse cities.

Emilio Castillo: ‘Personally, I’m not a jazz aficionado … It’s a soul band but it’s our original version, which has a high level of jazz in it. Jazz is always messing with the rhythm and taking it out harmonically, and we like to do that’

Tenor saxophonist and vocalist Emilio Castillo founded the band there in 1968 with baritone saxophonist Stephen “Doc” Kupka. Now 73, Kupka is still the group’s main songwriter and adds brief honking solos – reminiscent of Zoot, the balding, bespectacled saxophonist on the Muppets. A few years ago, life imitated art as Kupka played on the soundtrack of the latest Muppets movie.

Kupka and Castillo were soon joined by another surviving member, drummer David Garibaldi. In his case, surviving has a more literal meaning. Two years ago, Garibaldi and Dutch-born bassist Marc Van Wageningen narrowly survived after being struck by a train en route to a gig at Yoshi’s Nightclub in Oakland. They made a full recovery from their injuries and returned to the active line-up.

That line-up has included more than 60 people over the decades, including around 10 lead singers. The group scored their first Billboard hit in 1971 with East Bay Grease, but their eponymous third album, released two years later, remains its bestseller. It features lead tenor saxophonist Lenny Pickett, later known for his work with David Bowie, Paul McCartney and Talking Heads and as musical director of the US television show Saturday Night Live. What Is Hip? from this album has become one of the band’s trademark tunes.

After a riotous show at Pori Jazz Festival, bandleader Castillo told Jazz Journal about the keys to band’s enduring hipness.

What is hip? How has what is hip changed since you wrote the song?

It’s been changing since the minute we wrote it. That’s the whole point of the song: “What’s hip today just might become passé”.

How have you managed to stay hip?

I don’t know that we have. Sometimes you’re not hip and then it comes around and you’re hip again. I don’t worry about it too much.

Only when I have to. I’ve made many changes but never willingly. Marcus has been with us for two years. Ray went to Santana; we couldn’t blame him. Santana offers him half the work, twice the money.

Has there always been a friendly rivalry between the two bands?

I’ve known Carlos since 1970. We’ve recorded with him, toured with him. We’re very good friends. We respect each other. It’s hard when he comes and takes your lead singer but … he deserves all the success that he has. I hold no grudges. It’s a business.

When you were starting out, how much of a difference was there between the East Bay (Oakland) and West Bay (San Francisco) bands?

The San Francisco sound was the psychedelic thing, but that was kind of winding down when we came around. Santana came out maybe a year and a half before us, in ’67. But they were sort of part of our thing, the percussion and the Latin thing, much more ethnic and soulful than what was happening before. So we were both sort of a new wave.

Both bands were multi-racial. Was that rare at that point?

Sly Stone, who’s also from the East Bay, had already come out with the Family Stone. He was the guy that really made that mark. The whole Bay area is a melting pot. I grew up in Detroit where all the different ethnic groups were pretty separate. We’re Mexican and Greek, and we went out to the East Bay and fit right in.

You’re the quintessential American band, mixing soul, jazz, funk, blues, Latin, rock and so on. But what’s your relationship with jazz?

Personally, I’m not a jazz aficionado. I can appreciate it. Certainly there’s lots of jazz in our music because I’ve got great musicians. They have jazz chops and it would be foolish not to avail ourselves of those wonderful talents. So I inject that all that I can. But I’m a soul music guy. It’s a soul band but it’s our original version, which has a high level of jazz in it. Jazz is always messing with the rhythm and taking it out harmonically, and we like to do that.

Your horn section gets a lot of attention; does your rhythm section get overlooked?

Well, how many guitar players are there? Five billion zillion. How many horn sections? There’s five. So naturally having a five-piece horn section that stands at the front of the band and is at the forefront of the sound, that’s what people notice and talk about.

But what really makes us distinct is the rhythm. The way we approach it is completely different. We’re always messing with the beat. We don’t play no “okey-doke”, we’re just not into it. Even if we’re playing a song that has a backbeat two and four, we catch certain accents and do certain things that other bands don’t on the norm. We’ll hang it on the 16th before one, grab it on the two. If we’re all hitting two, let’s just hang that a little bit longer there. We know how to make it weird and be danceable at the same time. Sometimes we just want to be really out rhythmically just for the sake of it because nobody else can!

‘Arnett Cobb was the jazz tenor player that I dug, also Hank Crawford. Also King Curtis, Boots Randolph, Junior Walker, Steven Douglas from the Wrecking Crew, those rock’n’roll guys, who did a lot of tonguing’

Which jazz artists had a particular impact on you or other members of the band?

I also played guitar and organ and I sing, but really my instrument is the band. I’m a bandleader, I’m not a soloist. I write songs, I get great musicians and facilitate them to play together to make this kind of music.

The brass players are a special clan so of course they dig Miles and Freddie and all that. Adolfo Acosta came from Maynard Ferguson; Sal Cracchiolo played with Poncho Sanchez, Diana Krall and the Clayton-Hamilton band.

What’s the special sauce of the horn section sound? It’s got a bit of a ragged, jagged edge.

Yeah, we play illegitimate. When the legit players play four quarter notes they go baap baap baap baap but we go bap bap bap bap. We cut everything off. We don’t give it full value, we do a lot of smears and bends and weird stuff like that. We always arrange to the rhythm section. We always put the song first. You want to complement the track, but you want to make your statement as TOP horns and that takes a very special kind of arrangement, and Dave Eskridge’s been doing that for the past 25 years. He’s got it down to a science.

There’s a tune on our next album called Any Excuse Will Do where I told him I want the ride-out to be completely atonal. I said “Think Don Ellis … Don’t even think about the key, just be as out there as you can”. And we have this really out rhythm track. And he caught all those accents and this weird harmony; he’s really good at that.

When we record we usually do nine horns. We do a pass with the five and then a pass with two extra brass and either an alto and a tenor or two tenors.

Then we re-do it for five horns for the road. The live sound has a bit more of an edge to it, as it should. Some guys repeat their solos but I always like it better if they don’t.

What do you hope for the future of the band?

If it doesn’t get any better than this, I’ve already been overpaid, man. I’m just enjoying the ride.

Sally Evans-Darby - 15 August 2019
For those acquainted with Ella’s 1960 Berlin performance of Mack The Knife, which has assumed legendary status, this album needs no introduction. It’s almost hard to believe such lyrics...

Pablo Selnik: Decadence As A Virtue