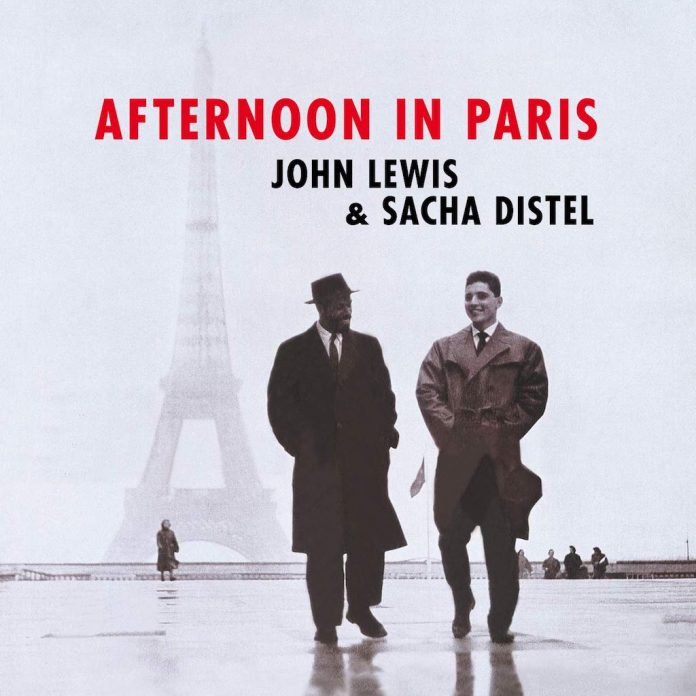 Welcome reissues of two Lewis sessions with French and German musicians. The first – Afternoon in Paris – features him and three MJQ colleagues – Heath, Kay or Clarke playing a combination of standards – “Dear Old Stockholm”, “I Cover the Waterfront”, and “Willow Weep”, with the title track (a Lewis composition) and the absent Milt Jackson’s “Bags’ Groove”.

The pleasant surprise is how well Wilen, Michelot and Distel react to and combine with their American cousins. Distel, later more famous as a heart-throb singer and sometime companion of Brigitte Bardot, was an accomplished guitarist, constructing logical and delicate solos. In his Downbeat review of the album, Leonard Feather opined that “If the MJQ were ever to add a guitarist, Distel would be the ideal choice; his solos dovetail temperamentally with John’s, blending simplicity with good taste and a modern harmonic ear”. Wilen and Michelot were not yet jazz household names in the United States, but had a growing following in Europe. Wilen takes several long solos. All are satisfying, but he is heard to advantage on “All the Things” (with a fleet-fingered contribution by Distel), as is Michelot, who throughout displays an excellent sense of time and solo dexterity.

Lewis oversees and underwrites the performances with his accustomed polish, sensitivity and innate swing – reminiscent of Teddy Wilson. His most impressive performances are on “All the Things” – with a series of exchanges with Clarke and a blistering solo from Wilen. A long and pensive “Willow Weep” opens with a beautiful solo by Lewis followed by Distel’s gentle ruminations and an appropriately plaintive Wilen. The piano player brings the proceedings to an elegiac close. An unusual and rewarding Franco-American collaboration.

The “bonus album” originally appeared as Animal Dance, and came out of a serendipitous meeting of Lewis and Albert Mangelsdorff at the Third Yugoslavian Jazz Festival in 1962. Lewis was surprised to learn that Mangelsdorff (whom he rated alongside J.J. Johnson) was barely represented in the catalogues, and resolved to remedy the situation. With the even lesser-known Karl Theodor Geier (from Freiburg) and Silvije Glojnaric (from Zagreb), Lewis formed a one-off quartet.

Supported by a polished rhythm section, Mangelsdorff offers a series of rapidly tongued, droll and idiosyncratic solos on a varied selection of titles. He is particularly impressive on “Monday In Milan” and “Why Are You Blue?” and a long, haunting version of “Autumn Leaves”, accompanied only by bass and drums. “Ornaments”, the last title, is by The Zagreb Jazz Quartet. A jolly, folksy tune with sparkling piano and vibes, it also features an extended and noisy solo by drummer Glojnaric. This track is mistakenly numbered in the liner note which also fails to mention Lewis’s absence and incorrectly asserts that he does not play on “Set ‘Em Up”.

Michael Tucker - 16 March 2019
The 2017 debut album from this Stockholm-based pianist and multi-instrumentalist received positive reviews and suggested to some an in-part deconstructive take on aspects of both folk music and the...