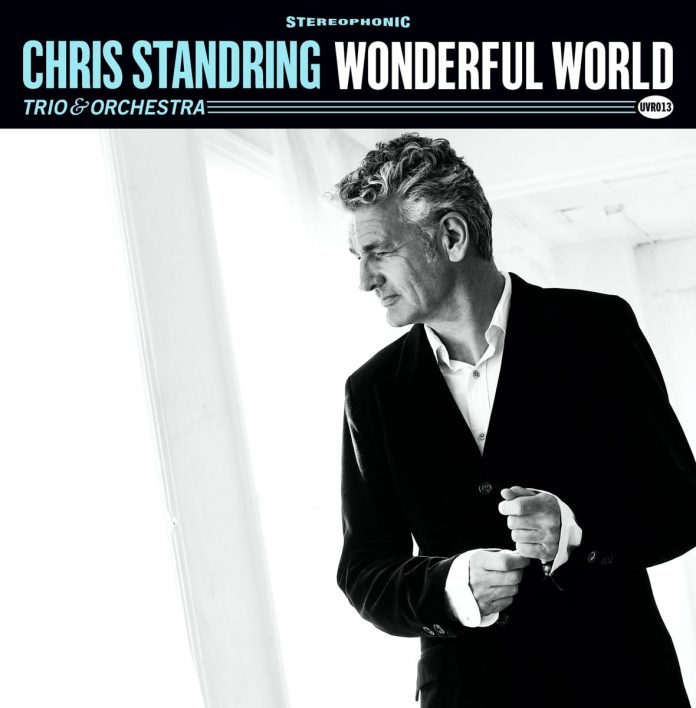 With only one original track, this album is very much about guitarist Chris Standring putting his own spin on songs from the Great American Songbook. The songs are personal choices selected so that they could be played either by a trio or arranged for a full orchestra.

The 19-piece orchestra is a new venture for Standring, but the objective was to be unashamedly lush and sentimental. To do that he needed players who could handle subtle arrangements whilst capturing the emotion of these famous compositions. They don’t get much better than Randy Brecker and Harvey Mason, to name just two.

Born in the UK, Standring moved to Los Angeles in 1991. Now a veteran of the contemporary jazz scene on the West Coast, he has worked with many artists including Carol Bayer Sager, Patti Austin, Bob James, Al Stewart and Kirk Whalum. He has also performed with many artists associated with smooth jazz in the USA, including Marc Antoine, Dave Koz and Peter White. Whilst distinctly “smooth”, this is a not a smooth-jazz album. The choice of standards, the calibre of the musicians and the use of a large orchestra brings this closer to a Diana Krall album in both sound and feel.

The sound quality is fabulous and Standring’s aim for the album to be lush and sentimental works on every level. Standring’s sophisticated guitar playing is the star of the show, but it is difficult to ignore stand-out contributions on flugelhorn by Brecker on Sunrise (the only Standring-penned track), vocals by Kathrin Shorr on What A Wonderful World and Harvey Mason on pretty much everything he plays on.

Without the orchestra this would still be a very good trio album. With the orchestra (and some fine arrangements and conducting by Geoff Gascoyne) this album is elevated to something special. A word of warning though. There is only so much “lushness” and “sentimentality” a listener can sensibly take, and this is an album to be listened to sparingly and when the occasion merits.

Elliot Marlow-Stevens - 29 November 2020
Mike Casey releases his latest album, a contemporary mixture influenced by both traditional jazz as well as modern pop and hip-hop. Recorded with his trio, the band is formed...