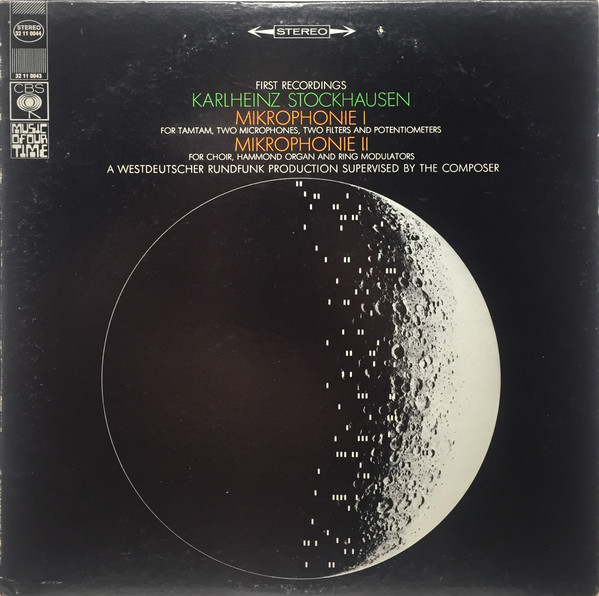 ‘Seven men perform the execution, with Stockhausen himself doubling a mean filter with a wailing potentiometer’

Keith Howell, Press Officer at CBS Records, is an amiable sort of geezer and when I read his letter which accompanied the box of records, I looked forward to some pleasant sounds. ‘I have a sneaking idea,’ he wrote, ‘that this may be of interest to you. Pleasant listening.’

Inside the box were two copies of an LP entitled First Recordings: Karlheinz Stockhausen – Mikrophonie I, Mikrophonie II. With one simple postage stamp, Keith Howell had for me put Pandora out of business for ever, and for the next two days or so, I suffered from Steve Allen’s well-known terrible horrors.

Herr Stockhausen is the way-out kid of contemporary serious music, much-revered by those who are prepared to abandon musical and emotional quantities for the sake of being with it or au fait.

Personally I think that Herr Stockhausen is some kind of elaborate German joke. In the race to be first to get farther than anyone else away from sanity, he leaves Albert Ayler sounding like George Formby on a slow night. Who says the Germans have no sense of humour? Practically everyone, I guess.

Mikrophonie I occupies the first side, and is produced electronically without ever touching a musical instrument. Seven men perform the execution, with Stockhausen himself doubling a mean filter with a wailing potentiometer. Most of the lead work is undertaken by Aloys Kontarsky and Fred Alings, whose grooving tamtams are probably electronic equations for Zoot Sims and Al Cohn. But you want to know what the music sounds like.

The second side features a choir in a nasty attack of ringmodulation in a catchy medley of Stockhausen hits. Karlheinz speaks: ‘Mikrophonie II offered the possibilities, as does purely electronic music, to compose with a scale of sounds ranging from natural to synthetic, from familiar (nameable) to unfamiliar (unnameable) ones. ‘The “what” (the material) is not separable from the “how” (the forming). I would never have composed as I did, had the “what” of this process not had specific characteristics which lead to a specific “how”. For example, when one uses ringmodulation, one must compose particular kinds of structures – simple superimpositions, many tones of long duration, not-too-rapidly moving layers – since ring-modulators create dense symmetrical spectra from simple material, and this can easily lead to an overweight of noise or a stereo-typed colouring of the sounds.’

And believe me baby, overweight is the least of his problems.

Fat Stuff’s Serenade
Subsequently, to my relief and delight, I moved another sheet of card­board from the box and found the label with the name and address of the French lady for whom the Stockhausen Strut was intended. She must have done something pretty dreadful to deserve such punishment. I also found The Rex Stewart Memorial (CBS Realm 52628), which is un­doubtedly one of the most satisfying reissue compilations I’ve yet en­countered and, at 25s and with a most generous playing time, as good value as you’re likely to find.

Roger Farbey - 24 December 2020
Pedal steel guitars have occasionally been used in a jazz or improvised setting but, in reality, not that often. Gary Burton's Tennessee Firebird (RCA, 1967) and Danny Gatton's Redneck...