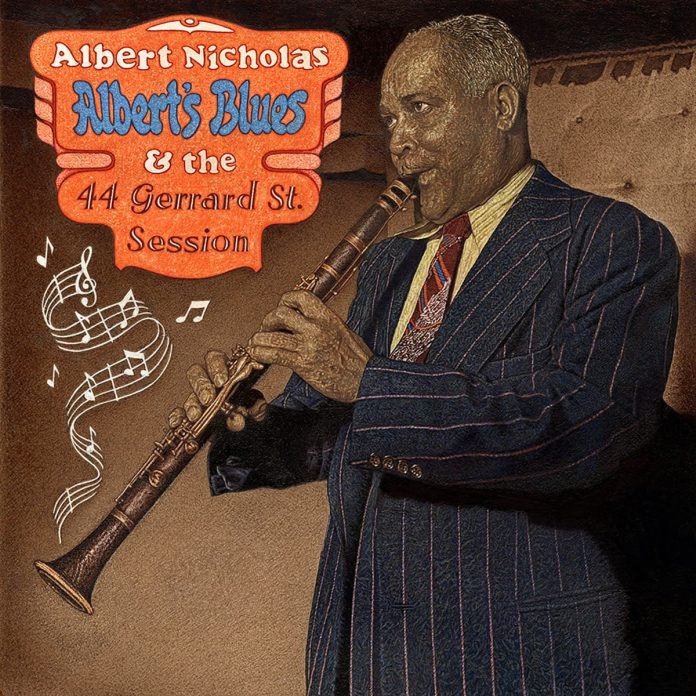 Born in New Orleans in 1900, Nicholas was one of the classically trained, accomplished Creole clarinettists in early jazz, ranking alongside Noone, Simeon, Bigard and Bechet in tone, style, technique and creative talent. He worked with all the biggest names, including Ory, Oliver, Morton, Armstrong and the Luis Russell Orchestra.

After brief doldrums, his career picked up again in the post-war revivalist years but his polished, precise style failed to attract the widespread popularity he deserved. He settled in France in 1953, and (like Bechet) spent the rest of his life busily active in Europe.

Tracks 1-10, plus two unissued tracks, were recorded in Brussels in 1966 for Doug Dobell’s 77 label, and issued on a limited edition LP entitled Albert’s Blues. Drummer Barry Martyn’s New Orleans style UK band was on tour there at the time, and a contingent from his group provides Nicholas with very suitable and capable backing, especially in the opening Salee Dame, a simple Creole folk song with a rare patois vocal from Nicholas.

Meticulously crafted, the old maestro’s nimble and elegant phrasing dominates the ensemble throughout the session, with a pure round tone, seemingly effortless, yet capable of strong rhythmic drive. Trumpeter Cuff Billet tucks in respectfully and tastefully behind the veteran star, sounding warm-toned and relaxed, and leaving plenty of space for Nicholas to work in. The rhythm section shows bright rhythmic drive and good cohesive rapport, especially in Jazz Me Blues, and pianist Richard Simmond’s expressive solo in Albert’s Blues sounds impressively authentic, close to Yancey in style.

The remaining tracks, from 10 years earlier, were recorded by Dobell at a private party session in a Gerrard Street basement. Never issued, these recordings have been cleaned up as far as possible from a privately owned acetate, though sound quality remains, inevitably, very home-grown. Best moments to glean from Nicholas occur in Found A New Baby and a fiercely upbeat High Society. There are good contributions from Humph, Bruce and Keith Christie. I’ve amended as best I can some sketchy personnel details. This informal jam session is not a must-have, but it’s a pleasing confirmation of the high regard held for him by the invited British musicians, and an enjoyable bonus on the album.

Derek Ansell - 20 May 2020
This 22-minute vinyl LP was a good candidate for Record Store Day which has now, for obvious reasons, been postponed until 20 June. Even if my wife thought I was...