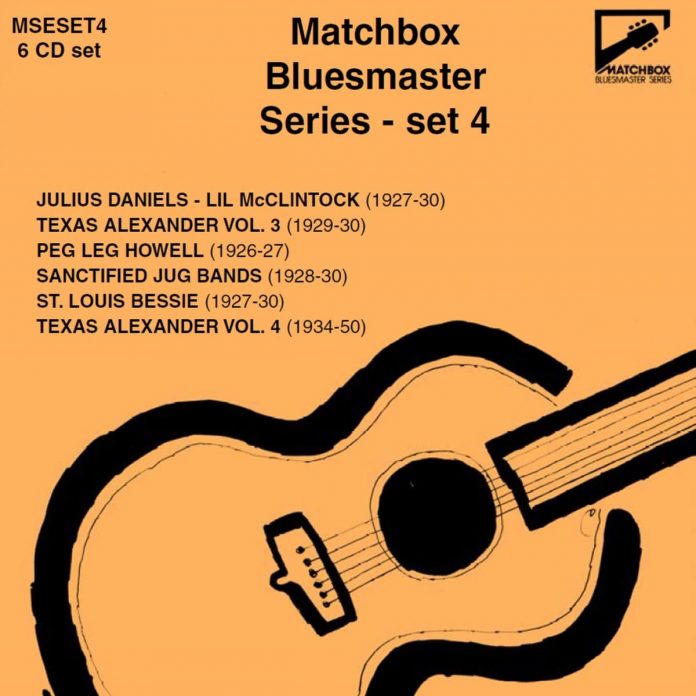 In 1968, Saydisc created the well-known and much respected Matchbox label with the objective of releasing material by contemporary British country blues artists as well as LPs of pre-war US country blues. When the British blues phenomenon did eventually run out of steam, Matchbox folded in 1977 but returned in 1982 to concentrate on pre-war US blues.

It is at this stage Saydisc created the well-received Bluesmaster Series, an undertaking which resulted in the release of 38 LPs and two double-LP sets. Many of these releases were transcribed from mostly rare 78s (as frequently no original source existed) or previously unreleased US Library of Congress recordings. Saydisc is currently making the whole Bluesmaster Series of LPs available on CD, and this is set 4 of a planned seven-set series.

Set 4 comprises six CDs with meticulous tracklisting and original liner notes by the respected blues historian Paul Oliver, who was a world authority on early blues and travelled in the US extensively to try and trace any remaining details of these sometimes-obscure musicians.

Comprising just under 100 tracks and lasting approximately five hours, this is blues-fan heaven. It features the music of Texas Alexander, who was a prolific and popular singer. Female blues is represented by the outlandish St. Louis Bessie (aka Bessie Mae Smith) complete with risqué lyrics and featuring some outstanding guitar playing by Lonnie Johnson. Atlanta blues comes from Julius Daniels and there is a variety of early gospel music from four sanctified singer groups, including the Brother Williams Memphis Sanctified Singers and Elder Richard Bryant.

The sound is more than acceptable considering the variable quality of the sources. This is pre-war US country blues at its finest and its rawest. It is also the yin and yang of the genre. The more authentic the blues, the more problematic the quality. Nonetheless, Matchbox have done a splendid job – first in preserving and committing the source to vinyl and then digitalising the entire Bluesmaster Series. Many of these artists, such as Texas Alexander and Bessie Mae Smith, are not as well known as some of their contemporaries but they are equally talented. Unfortunately, circumstances as much as talent often determined a musician’s place in the future blues hall of fame.

The music is of historic importance and highly entertaining. The listener is transported back to a time that we can barely imagine in the UK. The music is a testimony to the stoicism and the endurance of a black community that would continue to endure absolute poverty and discrimination for the remainder of the century (and later). The music is never about a better earthly future, but an expression of shared negative experiences. Race records, of course, were not targeted at white listeners. They were sold and marketed to be bought by a black audience, who could identify with the songs being sung. Gospel music did offer some hope of salvation; but even this was a temporary respite to the daily grind as the reward only ever came to you after you were dead. But music was (and remains to this day) a balm for a troubled sole and long may it continue.

This Bluesmaster Series should not be seen as the preserve of the serious blues collector. It can be appreciated by anybody with an interest in the history of music, America and social change. The DNA for swathes of non-classical Western music is probably in these tracks and sometimes it is surprising how sophisticated (musically) these early pioneers were. This may not be your usual CD purchase, but I doubt you will be disappointed if you take a chance.

Brian Morton - 08 June 2019
“I learned to play saxophone this way by listening to . . .” Longish list follows, containing most of the obvious modernist names, though only Evan and Maceo among...