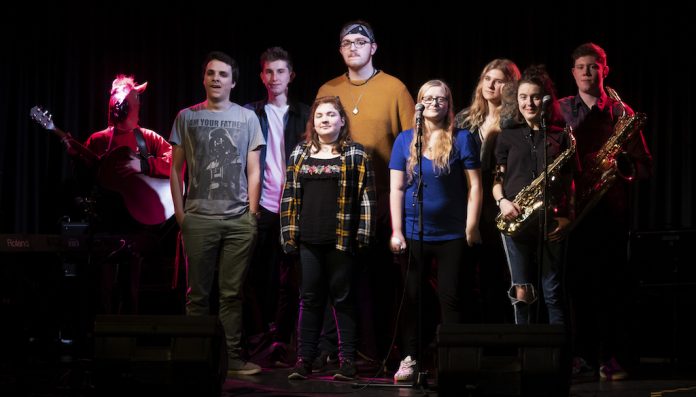 In my January 2019 profile of West Country musician Roz Harding I mentioned that she is heavily involved in education. Among other things she is saxophone tutor and musical director for the Jazz Project and the Jambassadors at the Exeter College Music Academy. This gig was a sort of end-of-term presentation by The Jambassadors.

The standard of playing (and singing) was very high, with no weak links and no need to make allowances for youth and relative lack of experience playing in public, but what added an extra level of interest were the different methods Harding set up to encourage and inspire improvisation.

The concert opened with some “warm-ups/tunings-in”, the first couple strictly timed to two minutes, and beginning with vocalist Sarah Woodison and alto saxohphonist Morgan Wallace bouncing ideas off each other. After some similar exercises the whole band was involved in interpreting “dream lyrics” supplied by Harding and previously unseen by the musicians.

Individual talents were beginning to stand out but the most important aspect of the performance was the way everybody was listening and responding to the rest of the band, an essential approach if collective improvisation is to be coherent rather than simply a free-for-all melée. (Not that I’ve anything against melées, which can be exciting and fun.)

Pianist Zac Ward was featured on his exquisite composition Mild Winter, contributing a long unaccompanied solo on electric piano before being joined by violinist Maya Richards, then the whole band.  Guitarist Luke Murray’s Figure Of Eight built to a rampaging free-bop workout.  The band also improvised on pre-existing pieces, including Melt Yourself Down’s tune Fix My Life, when the ensemble really nailed the compelling North African-influenced riffs, and Lennon & McCartney’s A Day In The Life, where exciting all-in improvisations substituted handsomely for the famous orchestral glissandi on The Beatles’ recording. For a well-deserved encore the band chose McCartney’s Great Day.

As I said, I could discern no weak links; all the players not only seemed accomplished singers or instrumentalists, but also fine musicians (which is not quite the same thing and is more important in my book), so it may be invidious to pick anyone out, but Richards soloed well and contributed strongly and sensitively to the whole ensemble and smaller groupings drawn from it, Murray’s Figure Of Eight evinced ambitious ideas and he is a risk-taking improviser, Woodison has a strong and distinctive voice, and bassist Ollie Fonnereau has developed an admirable tone. Wallace has an intense sound, a good ear for what will work in the context of the ensembles, and she solos with impressive fluency and inventiveness. She is a player to watch and it will be interesting to see how she develops after studying jazz at Trinity College of Music. Murray and baritone saxist Ajay Furse are also off to study jazz, but at Leeds College of Music.

The Sound of ’59 among the rhubarb at Wakefield Jazz

David Sanborn: Anything You Want – The Warner, Reprise, Elektra Years...

Bruce Crowther - 16 July 2020
Jack Purvis was a remarkably gifted musician who led an astonishing life. Unfortunately, trying to trace his life is like stumbling blindfold through a minefield. Purvis’s life...

Jazz Journal - 15 August 2019
Sir, With reference to the section of Steve Voce's column on Al Grey with the later Count Basie band, may I suggest readers seek...

Jazz Journal - 30 May 2020
Eberhard Weber's Colours/Stinky WinklesWeber's quartet fit all too easily into what has become known as the 'ECM sound'. The group create moody and impressionistic soundscapes, delivered with...

Dave Jones - 22 October 2019
This multi award-winning documentary film by Bruce Spiegel was eight years in the making, and features over 40 interviews, including some with those who were closest to...