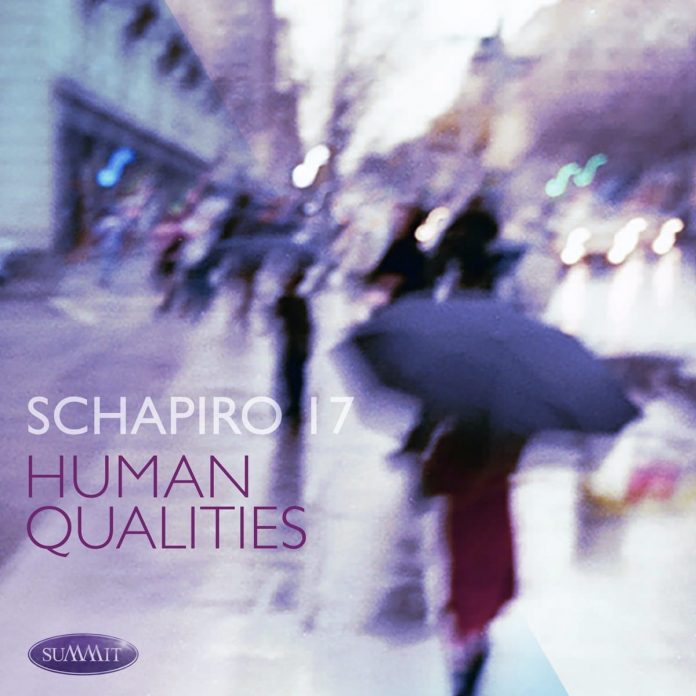 Schapiro 17 is an ensemble led by composer/arranger Jon Schapiro, conceived in 2012, whose previous release New Shoes: Kind Of Blue At 60, a fresh take on the Miles Davis classic album, received a very favourable review from Gordon Jack in August last year. Its follow up, Human Qualities, is a totally different proposition, containing seven of the composer’s originals and Ewan MacColl’s The First Time Ever I Saw Your Face.

The Basie-like introduction to Count Me Out is a total blind, as this is soon discarded to introduce a thoroughly modern Rob Middleton saxophone solo punctuated by blasts from the horns, before entering a period of languor replaced by a passage of call and response. This is nicely balanced by the genuine rhythms of Tango, dominated by the baritone of Matt Hong.

Hmmm has a shuffle beat around boppish tendencies, with some of its best moments coming from the exchanges between trumpet and saxophone – this contrasts nicely with the imaginative arrangement of the popular MacColl piece, which is carried along by a nice and light swing.

The title track, a medium-tempo piece, has some pleasing examples of sections offset against each other, some bluesy alto from Rob Wilkerson, and a series of contrasting passages. Hallelujah, however, belies its title with a brooding opening, eventually giving way to a Latin groove serving as a backdrop to the electric guitar of Sebastian Noelle.

The music is rounded off by A Bounce In Her Step, based on Billie’s Bounce and House Money, very much Ellington inspired, complete with Nanton-like trombone from Alex Jeun.

Schapiro’s approach is very much of the moment, although as indicated, never dismissive of the past, so his talents should appeal to big band devotees both ancient and modern.