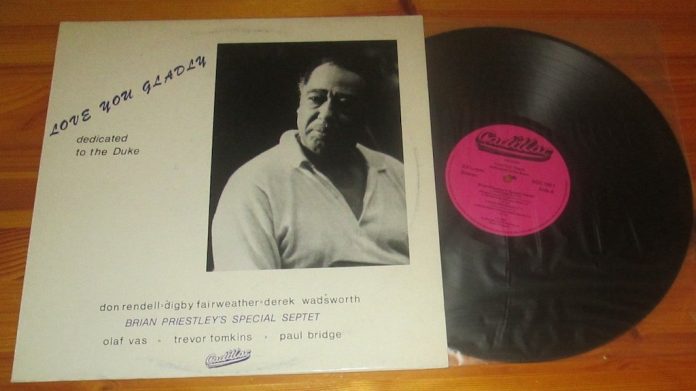 It’s good that this fine band has at last made an album. Apart from an appearance on Sounds Of Jazz and far too few gigs, it isn’t nearly as well known as it should be. It uses some of the finest players in the country and – against all expectations – succeeds in adding to the Ellington legacy.

Priestley is able to fashion Ellington-like constructions and then let his improvisers work on them. The result is much origi­nality while still retaining the Ellington flavour of say, Band Call and Downtown Uproar (originally composed by Duke for Cootie Williams’ Rug Cutters). The writ­ing is clever without being smart and the way Brian works a whole lorry load of Duke’s themes into the abominably-titled Blooz For Dook (can’t you spell, Priestley?) is inspired.

Don Rendell remains one of our most under-appreciated giants. Why is this? His work here is confirmation of his greatness. On the face of it the pairing of Digby with Derek Wadsworth is unlikely, and the fact that the two work so well together is another testament of Priestley’s imagina­tion. Vas fills out the Ellington sound, and it would be hard to ask for a better rhythm section than Paul Bridge and Tomkins.

These tracks are awash with good solos – this is a mutual inspiration society. Priestley’s Ellington chords are played with­out hesitation and if we still had a record of the month choice, this one would most certainly be mine. A most enjoyable album.
Steve Voce

Steve Voce - 03 October 2019
This new set from Acrobat collects four albums - Sing A Song Of Basie, Sing Along With Basie (the latter with the full Basie band), The Swingers and The...