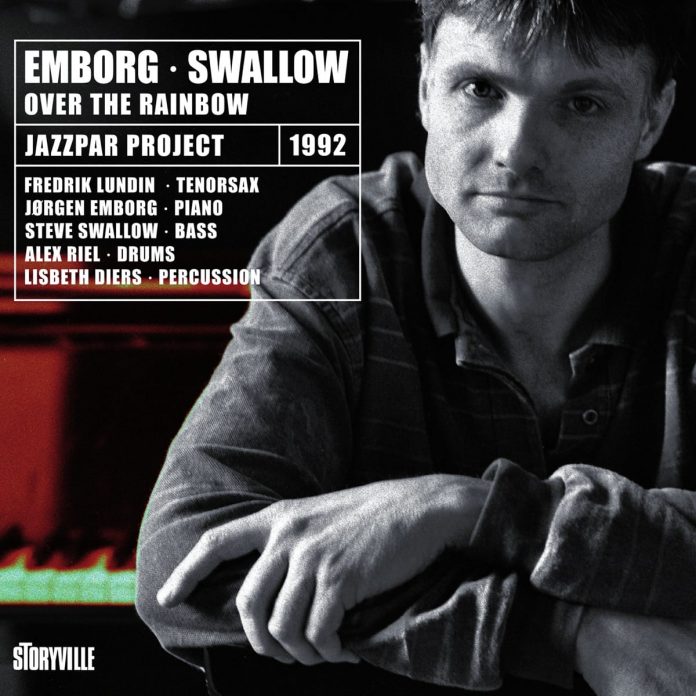 This strong and melodically attractive release documents the productive meeting of Emborg and Swallow in 1992, when Emborg invited the pioneering bassist to participate in the recording session which followed Emborg’s being awarded the prestigious Danish Jazzpar Prize. With the exception of Arlen’s Rainbow, Bernstein’s Time and Say After Me Please, which is co-credited to Emborg and that excellent saxophonist Fredrik Lundin, all the pieces are from Emborg’s harmonically literate, rhythmically fluent and modally aware hand.

In an interview with John Mehegan in Jazz in January 1965, Bill Evans spoke of the artistic importance of what he called “the central path, which absorbs beauty and quality wherever it is to be found, to the exclusion of everything else”. Over The Rainbow charts just such a path, blending post-Evans modern-to-contemporary mainstream and fusion factors to both seamless and consistently stimulating effect.

The opening Uneven Thinking epitomises Emborg’s ability to move from passages of poised melodic exposition to a burning full-on groove, a touch reminiscent of Klaus Doldinger’s Passport and with the excellent Riel kicking things along superbly. Riel switches to brushes for the following and delightful Waltz In Four, featured in the Emborg two-CD selection Swan Songs (Stunt Records) which I gave four stars. Pianist, jazz historian and Evans enthusiast Brian Priestley says in his sleeve note here that the piece is based on a rhythmic idea that was first exploited in jazz by Bill Evans, and suggests further that “it is no disgrace to either Emborg or Swallow to note how they sound inspired here by the tone and the freedom of Evans and Scott LaFaro’s pioneering work”.

Herbie Hancock and Keith Jarrett are also often cited as influences on Emborg. However, to my ears he long ago established the sort of personal, melodically rich, rhythmically and atmospherically supple identity – as both player and composer – evident here. His fellow Scandinavians on this now vibrant, now reflective date are equally noteworthy.

Sample the interplay between Riel and Diers which fires up the latter stages of Password (where Emborg really stretches out) or relish the assured shifts in dynamics and rhythmic attack in Lundin’s soprano lines on Uneven Thinking, as well as the authority of his tenor solos on Forgotten Truth, Rainbow and My Kind Of Blues. As for Swallow: Priestley rightly praises his “beautifully spacious bass work”. While – to my ears, at least – the brief passages of upper-register glissando and sweetness of tone in his solo on the title track can grate a touch, elsewhere Swallow’s mellow depth of sound and spaciously rendered blend of rhythmic and melodic figures are indeed beautiful.

The reflective and quirky, somewhat ECM-like duet between Emborg and Lundin (on soprano) that is Say After Me Please leads into the four further such pieces which constitute the quicksilver six-and-a-half minute suite which offers an intriguingly pitched coda to a most satisfying recording. It sounds as good now as it must have done nigh-on 30 years ago – and doubtless will 30 years hence.

Matthew Wright - 04 December 2020
Eddie Heywood was a pianist in the Teddy Wilson mould and the tracks on this double CD are a selection of material from the 40s and 50s, with well-known...