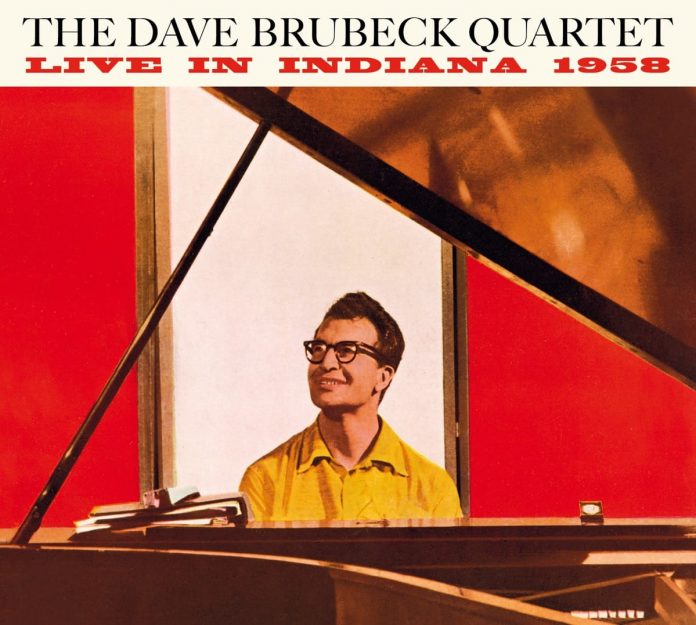 Brubeckians will rejoice at the appearance of a previously unreleased performance at George Wein’s Midwest Jazz Festival in the intriguingly named French Lick, Indiana in 1958. Given that it is also paired with the group’s appearance at the Newport Jazz Festival in June 1960, there is much to applaud.

At both venues Brubeck, Desmond, Wright and Morello – recently returned from a year-long State Department sponsored world tour (playing 80 concerts in 14 countries) – played some of the compositions that they were to record a few days later on the seminal album Jazz Impressions Of Eurasia, with Joe Benjamin replacing Eugene Wright.

The French Lick date opens with Nomad – a Brubeck composition – inspired by his experiences in Kabul (where nomads used drums to ward off wild dogs) and described in his reflective notes on this engagement. The piece begins with Morello on tom-toms before Desmond contributes a lithe and lyrical solo. That’s followed by an initially restrained Brubeck performance that builds into a “locked-hands” crescendo. Morello then adds a dynamic break that brings an exhilarating performance to an end.

Desmond and Brubeck emote gently on the Polish word for “thank you” (Dziekuje) gently propelled by Morello and Wright. The Golden Horn (another Brubeck original), maintains a joyous and rhythmic pace, with Desmond at his nimble best, and the pianist hanging back before launching into an extended and propulsive solo. A stately Brandenburg Gate, which was to become a favourite quartet number, has Paul and Dave in telepathic communication. Sounds Of The Loop is a feature for Morello and received a near-hysterical ovation from the audience. To these ears (but don’t repeat this) it is far too long (7.49), loud and repetitive.

The 1960 Newport appearance by the quartet – introduced by MC Willis Conover as “the gestalt four” – coincided with the chart-topping recording of Take Five from their LP Time Out. It reappears here as an (unaccredited) New York City June 1991 live performance. The opener, Swanee River (taken from the album Gone With The Wind) is propelled by Morello’s precise punctuations, followed by a languorous Southern Scene from the album Southern Scene (1960).

I’m In A Dancing Mood, first recorded by Brubeck as a solo rendition on Brubeck Plays Brubeck (1956), has a sprightly statement of the theme by the pianist, before Desmond offers a “dancing” chorus followed by delightful exchanges by all participants. Dialogues For Jazz Combo And Orchestra – Adagio – was released on the album Bernstein Plays Brubeck Plays Bernstein (1961), and composed by Brubeck’s older brother, Howard. It opens with an ethereal contribution from Desmond, a light-fingered Dave, and subtle brush work from Morello.

Blue Rondo (the longest track on the album) rings the now familiar changes on a composition first introduced on Time Out. Desmond is at the top of his game, sprung by bass and drums, before Brubeck’s repetitive and heavy-handed entrance. But the combo builds up a good head of steam, much to the satisfaction of their audience. The concluding Take Five more or less replicates the famous recording, and Morello delivers the expected goods with consummate skill. Recommended.

Fred Grand - 13 December 2019
If you’ve ever experienced the thrills of Cirque du Soleil you’ll know that circus music has come a long way since Julius Fučík’s Entrance Of The Gladiators (1897). Conceived...