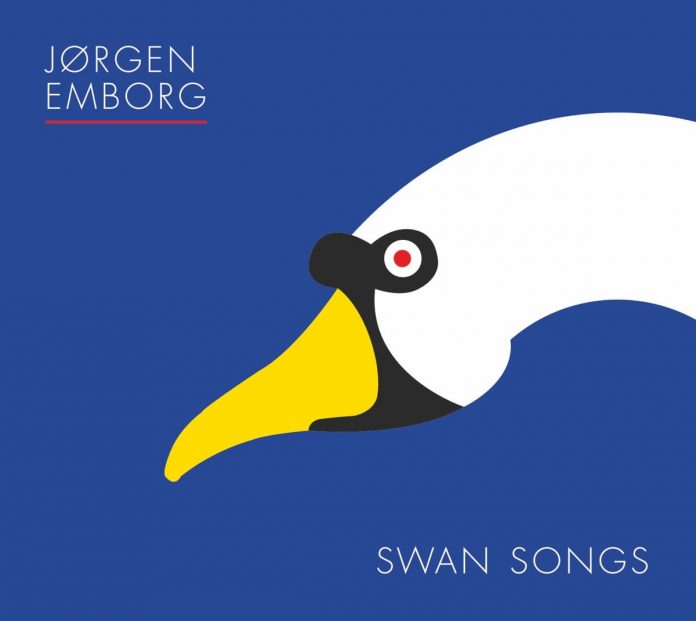 The Norwegian pianist, painter and graphic artist Svein Finnerud – who died of a brain tumour in 2000, just short of his 55th birthday – felt life to be “a beautiful monster”. I imagine the estimable and widely recorded Danish pianist Jørgen Emborg (born 1953) might feel no little empathy with such a characterisation.

The brief sleeve-note Emborg supplies tells how his experience with Parkinson’s Disease took a violent turn for the worse at the beginning of 2020, rendering him incapable of playing. But his words end on a measured accent of hope, revealing how he has invested recently in a piano bench with backrests.

It is to Emborg’s great credit that not a bar of the Swan Songs date has any hint of self-pity. Cut early in 2020 with the excellent Swedish pianist Lars Jansson in Emborg’s place – and featured alongside a stellar selection of Danish talent, interpreting Emborg’s elegant compositions (with occasional lyrics by Lisa Freeman) – the chiefly smiling, up-and-swinging post-fusion programme finds room for some transpersonal reflective moments. Hear Beautiful As A Spirit, where Mathias Heise’s opening and closing harmonica melody is affectingly lean, the stand-out For Lars, and the ballad meditation on growing old that is Remember – which, with its mellow contributions from Eeg and Ulrik, has an archetypal import that speaks to all.

I’ve long enjoyed Emborg’s work – if you don’t know it, check out his crisply sprung solo on the Tolvan (big) Band’s reworking of I Remember You on their 1995 The Touch – and I first heard Heise on Emborg’s What’s Left from 2017, which got a three-star JJ review from me. Reviewing that release, Dave Gelly underlined Heise’s flute-like “pinpoint articulation” on the chromatic harmonica as well as his uncanny empathy with Emborg’s phrasing. With customary insight, Gelly spoke also of a chief characteristic of Emborg’s work – “an attractive tunefulness that’s not as simple as it sounds on first hearing”. It’s a quality which marks the second disc here, a generous selection where Emborg leads a variety of mostly jazz-rock and fusion-inflected groups from the late-1970s on: sample the driving February Crystals, where Emborg’s clipped and assertive electric keyboard figures shine.

For all his tunefulness, Emborg has been a controversial figure for some. When his jazz-rock group Frontline was awarded the Ben Webster Prize in 1985, older patrons at the ceremony declared loudly that such music had nothing to so with Webster’s world. In truth, the lyrical quality in much of Emborg’s work is not a million miles from the The Frog.

Bill Evans, Herbie Hancock and Keith Jarrett are often cited as influences, but to my ears Emborg long ago established his own melodically appealing, rhythmically and atmospherically supple identity – even if some of his pieces can bring to mind aspects of Klaus Doldinger’s Passport or Ketil Bjørnstad’s early, pre-ECM work. Apart from Emborg’s playing and charts, a special feature of the music is the quality of the bass playing, whether acoustic or electric. Emborg has worked with the cream of Danish bass talent as well as, e.g., the Swede Lars Danielsson, and Steve Swallow – who recorded with Emborg on the 1993 Over The Rainbow. Enjoy, especially, the spare and tough funk of Skipper Mosgård on Breathless from 1986’s Frontline.

Brightly turned, sometimes strongly inflected figures flow consistently from front men such as Emborg himself, Ulrik and Roupé. I was especially taken by the potent alto and flute of zum Vohrde, who features in several now driving, now meditative selections from Emborg’s early days as leader.

Emborg is well known for the quality of his writing for voices and there are plenty of examples to enjoy here, including the multi-part Song In Blue from 1999’s Verdens Navle. But, engaging as they are, I would willingly have swopped one of these vocal-led tracks for a piece from the duo session Emborg / Avsted which Emborg cut with Max Avsted (o) in 2012, unfortunately not represented here.

Much care has gone into the extensive and attractive packaging, which includes a good overview essay by Niels Christensen and colour reproductions, with full personnel, of Emborg’s 18 albums as leader, plus a list of his appearances as sideman on further consequential recordings including three with Sweden’s Tolvan (big) Band. However it is difficult, if not impossible, to pinpoint the origin of a fair few of the pieces here, the sleeve details concluding with the less than helpful indication “Emborg in a variety of settings”. But this remains, nonetheless, a fine tribute to a richly accomplished musician and composer. I’m sure JJ readers will join me in wishing him, in his current most testing circumstances, all the very best.