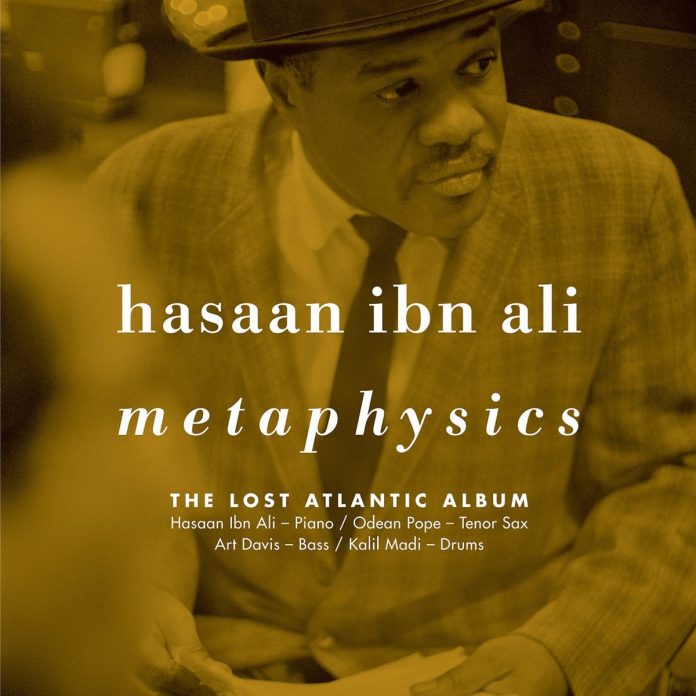 The expression “musician’s musician” signifies esteem from colleagues and cognoscenti which equals poverty and therefore very likely leaves the subject disgusted. Perhaps “best kept secret” is even worse, preluding destitution and a lavish portion of vomit. Before his breakthrough, Thelonious Monk had been under the radar and beyond broke for 15 years. It was only after his demise that Herbie Nichols was heralded as a maverick pianist and composer.

The similarly quirky piano player Hasaan Ibn Ali is still virtually unknown beyond a coterie of avant-leaning buffs that cherish his only album as a leader from 1965, The Max Roach Trio Featuring The Legendary Hasaan Ibn Ali, reviewed by JJ in 2019. Those diehards will no doubt enjoy Ali’s second date for Atlantic Records, which allegedly was lost in a fire but after more than 50 years is finally retrieved by persistent initiators Alan Sukoening and pianist and professor Lewis Porter and presented by Omnivore on double vinyl and CD as Metaphysics.

Partly, Ali got himself in trouble. The hardcore style of the Philadelphian, who according to some accounts inspired John Coltrane’s (in)famous “sheets of sound”, is beyond capricious. It is very original but lacks the charming playfulness of Monk. Furthermore, the eccentric Ali, born William Henry Lankford Jr., was known for erratic behaviour, on occasion pushing pianists off the bench if they failed to meet his demands. The commanding theoretician slipped back into oblivion after The Legendary Hasaan Ibn Ali and passed away in 1980.

To my mind Metaphysics pales in comparison with its forerunner, which was not only of superior sound quality but involved a continuous dialogue between Ali and Roach. Instead, drummer Kalil Madi’s frenzied efforts to keep up with Ali’s fantasies at the crossroads of Armageddon and Eden are less stimulating than obstructive. The fiery Coltrane-inspired lines and exhortations of Odean Pope, who was mentored by Ali from a young age, are much more convincing. The resolutions that Ali finds in his hybrids of tradition and avant-garde are fascinating, although he often sounds like a hoarder that rummages through the litter. While his obsession with the highest notes is rather confusing, Ali’s introductions to these compositions are breathtakingly refreshing.

Ali excelled in writing wicked tunes. The punch-drunk assault of El Hasaan brings to mind explosive Mingus performances. Metaphysics connects Charlie Parker’s Confirmation with a furious jungle beat. Viceroy is a witty and challenging variation on a cigarette advertisement jingle, though it sounds more like an invitation to the Benzedrine blues. The blackberry-coloured movements of the ballad Richard May Love Give Powell constantly put you on the wrong track. This homage to Bud Powell’s brother Richard, who died in the same car crash as Clifford Brown, has all the makings of a belated classic.

The release of Metaphysics is a fortunate event, mostly on the strength of Ali’s unique compositional gifts.

Laura Clark - 12 July 2020
Well-crafted, with a hint of Kraftwerk, this Berlin-based foursome may look warm and fuzzy in their assorted knitwear, but their music has the rhythmic punch of Jackie McLean. Composer Julius...

Jazz Journal - 31 May 2021
More ECM angst, this time with the bizarre ingredient of the usually jolly Django Bates trying to confront the overwhelming melancholia of vocalist and lyri­cist Sidsel Endresen. He fails, for...