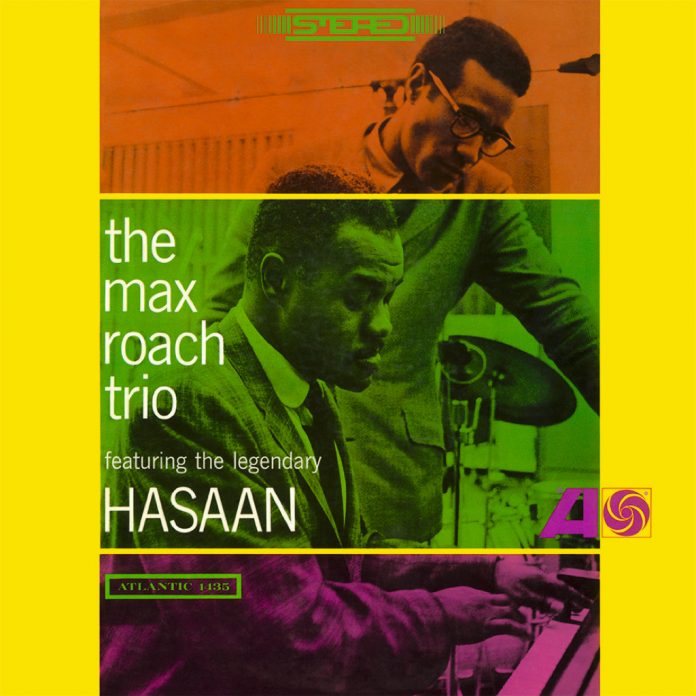 Ever heard of a virtuoso jazz pianist named Hasaan Ibn Aly? No, me neither. Well, not until this LP arrived in the post. Hassan appears to be that rarity, the gifted but truly forgotten, virtually unknown contemporary jazz pianist. Known to just a handful of musician in 1964 he turned up in New York one day and ran into trumpeter Kenny Dorham. Kenny contacted Max Roach to ask if they could help him. Max replied instantly “Help him? Sure we can help him”.

Using his good standing at Atlantic Record Company, Roach managed to set up a recording for Hasaan with Art Davis on bass and himself at the drums. Perhaps wisely, given his obscurity generally, Atlantic set up a session headed by Roach as the Max Roach Trio. And so it came to pass that a 12” LP was recorded in NYC in 1964 with Hasaan bringing along seven original compositions to play.

Hasaan’s music is difficult to describe as it compares directly with no other. It is brash, percussive and although it obviously owes a lot to his credited main influence, Elmo Hope, there are also traces of Cecil Taylor and Art Tatum.

The first track offers an exercise in four-four, six-eight and three-four time, as the title implies; the shifts to a different meter are abrupt and percussive. Left alone he might have got caught up in a web of ever-changing exercises but Roach and Davis keep him steady with sympathetic, percussive interjections and guide lines from the drums and a steady beat in all time signatures from the bassist. Roach is exceptionally strong in his forceful but always musical approach, playing loudly most of the time to key in with the aggressive playing of the pianist and slowing things down when it appears appropriate to do so. If Hassan plays loud, fractured lines in a most percussive manner, Roach responds in similar way and Davis adds ballast playing at the bottom of the chord.

All in all it makes for a stimulating, intensely original programme of jazz from three masters of their instruments. The compositions are mainly frameworks for improvising rather than memorable melodies. There is much improvised invention to be heard and the pianist was obviously in his element in this fairly sparse setting but very lucky to have two rhythm partners like Davis and Roach.

So why did he never make it or make some sort of name for himself? His approach and contemporary stylings may have been a bit too far out for most jazz enthusiasts perhaps. But then Taylor, Hope and even Thelonious Monk won through in the end even though Elmo’s time was brief. Perhaps he lacked self-belief and wasn’t pushy enough in the fast-moving world of jazz promotion. At any rate this one issue, his only recording to be put on the market is back at last in a well-mastered, well-pressed LP dressed up in a facsimile of the original Atlantic cover. It is distributed by speakerscornerrecords.com.

Ronald Atkins - 02 February 2020
This follows on from Riley’s earlier album Hold ’Em Joe in being presented as a kind of tribute to Sonny Rollins - a third will complete the series. On...