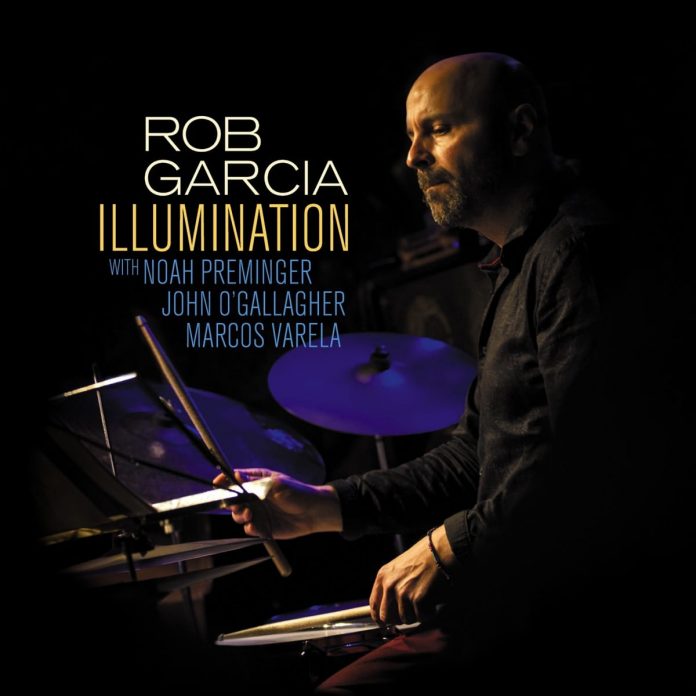 Drummer and composer Rob Garcia is a major mover in New York’s artist-run organisations and a leading light on the Brooklyn jazz scene. He’s worked with Diana Krall, Reggie Workman, Wynton Marsalis and Dave Liebman amongst many others and played on over 70 albums. This is his ninth album as leader.

Twenty years ago he was the go-to man for bandleaders who wanted an authentic jazz-age or New Orleans style drummer in their ranks and for eight years he played in Woody Allen’s New Orleans Jazz Band. But despite his trad credibilty, Garcia was a modernist inside who preferred the music of Thelonious Monk and company. Consequently, he gave up the trad gigs to follow his true vocation: contemporary jazz that’s composed by himself.

Garcia’s current quartet comprises Noah Preminger (a Downbeat rising-star best tenor saxophonist who’s played with Roscoe Mitchell, Fred Hersch and Jason Moran amongst others), alto saxophonist John O’Gallagher (Maria Schneider, Kenny Wheeler, Rudresh Mahanthappa) and bassist Marcos Varela (Charli Persip, Geri Allen, Orrin Evans). Garcia’s played with each of his band members for several years and most of the album’s tracks were written by him with these players in mind.

Two of the numbers are rearrangements of American folk songs, with Father Get Ready particularly melodic. JJ Sensei is a tribute to Joseph Jarman, founding member of the Art Ensemble of Chicago. Garcia played and also studied aikido and meditation with Jarman for several years prior to his death. The album’s title track stems from the Buddhist concept of allowing the internal light that we all possess to shine through our shadows, a practice that has inspired Garcia for a long time.

Garcia’s drumming is a delight – you can actually listen to it with unfading interest. His songs, with their unusual time signatures and constantly evolving patterns are delivered by a cutting-edge combo and executed with an often dazzling improvisational artistry.

Mark Youll - 25 October 2021
On an early trailer for this previously unheard show from 2018, Chick Corea remarked on how much the Akoustic Band had evolved since the group's formation in 1987, and...