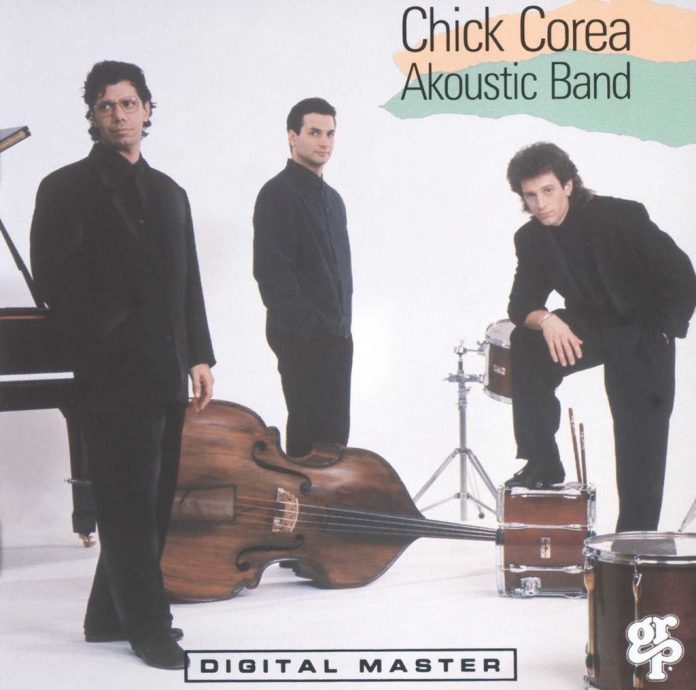 A highly superior issue by one of jazz’s richest contemporary talents. If you know Chick’s work with Miroslav Vitous and Roy Haynes and like that as much as I do, you may read no further: just go out and get it. His latest confrères may be less renowned, but they are comparably magnificent players, and both serve Chick and the trio’s overall conception unimprovably.

Rather like Chick’s ECM Trio Music dates, this album offers two distinct sides of his musical personality and rich craft. The first four cuts show how steeped he is in jazz tradition, furnishing exquisite and properly individual interpretations of songs central to the jazz canon. Here one notes how avid has been his listening to other great players, although he is of course his own man (and always was, from his auspicious mid-60s debut). One can detect Hancock, Tyner and of course especially Evans in his approach; but I would also add the name of Oscar Peterson, whose joyously incandescent, perfectly articulated rhythmic power distinguishes Chick’s work too, even if the route Corea takes is noticeably different. If you feel like scoffing at this suggestion, try Autumn Leaves (a regular OP favourite): the actual style may be different – indeed obviously is – but the values and musical criteria are analogous.

Side two offers four Corea compositions, one of them (Spain) already dear to me via a Woody Herman 70s album, King Cobra. The compositional approach and structural appreciation may seem very different from those of the standards on side one; but they achieve homogeneity with those songs through the sheer unifying force of Chick’s musical character.

Not the least thing I love about Corea is how formidably he swings: no matter how complicated or cerebral his improvisations become, his playing always has unmistakable balls. In this way he reminds me of Sonny Rollins, and the thought occurs to me that a collaboration on record between them would be no bad idea.

This is a marvellous album, wholeheartedly recommended. Judging from the year’s issues so far, next February’s Record Of The Year Poll is going to be unusually competitive, but I’m sure this will be among my choices.
Richard Palmer