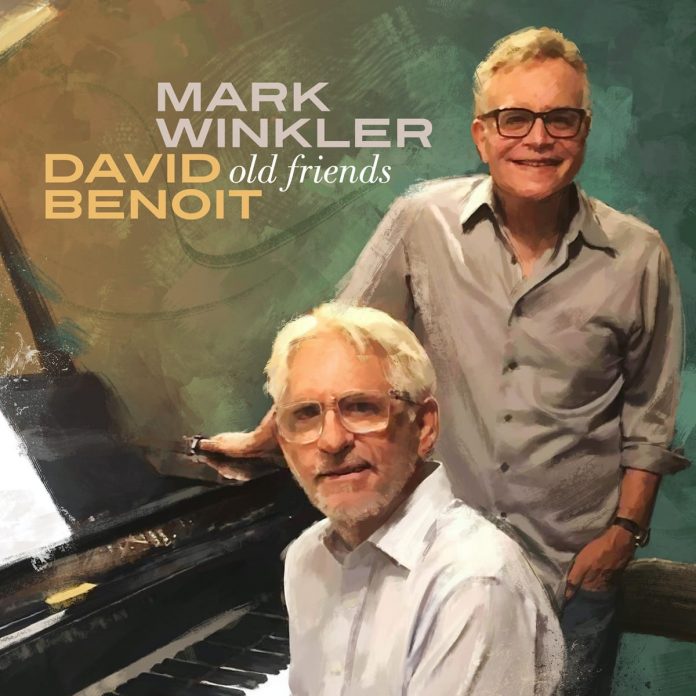 Good things can come out of bad. Although singer Mark Winkler and pianist David Benoit have been friends for decades and have occasionally worked together, the idea for this duo album resulted from the Covid-19 pandemic.

Benoit was booked to appear in Japan and his wife had preceded him so that she could spend time with her family. Then, before he could join her, Japan went into lockdown; he couldn’t go there, Kei couldn’t come back. While Benoit was spending some of his enforced idle time with Winkler, the two musicians decided to make this album.

Although well known as a cabaret singer with more than 16 albums to his credit, Winkler is a relaxed and intimate vocalist. He is also a well-known composer of stage musicals, among which Naked Boys Singing! is the second longest running off-Broadway show in history, and another, Play It Cool, has been playing off-Broadway for the past decade. Performing as a jazz pianist, Benoit has recorded around 40 albums and has also composed scores for movies and the stage.

The songs chosen for this release draw upon the jazz and cabaret work of Dave Frishberg and Bob Dorough, modern standards by Leonard Bernstein and Paul Simon, and some originals written by the two old friends. Relaxed and thoughtful words and music that should please many.

Discography
I’ve Got Just About Everything; Sweet Kentucky Ham; Better Than Anything; The Shadow Of Your Smile; Two For The Road; Old Friends / Bookends; When This Love Affair Is Over; I Think It’s Going To Rain Today; In A Quiet Place (Kei’s Song); I Wish I’d Met You; Dragonfly; Thirty Years (Only Sunshine Days); Some Other Time (52.00)
Winkler (v); Benoit (p, org on When This Love Affair Is Over) with collectively Pat Kelly (g); Gabe Davis (b); Stefanie Fife (clo); Clayton Cameron (d); Kevin Winard (pc). Glendale, CA, 2020.
Cafe Pacific 5010

Thomas Fletcher - 26 October 2021
It’s been six years since Bob Mintzer took charge as chief conductor of the WDR Big Band, and during that time he’s organised concerts and album releases featuring many...