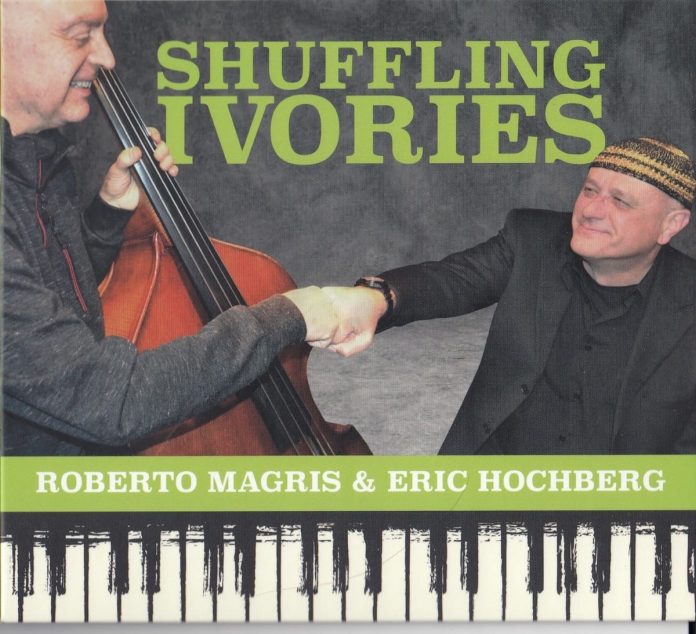 The title is a play on Shuffle Along, Eubie Blake’s 1921 Broaday musical, written in partnership with Noble Sissle, and with Blake as a starting point this piano and bass album offers a wide-ranging tribute to various styles of ivory-tickling, shuffling them to some extent as it goes.

The first and title track is a traditional swinging blues with Monkish moments, written by Magris. I’ve Found a New Baby is a lively conversational treatment of the standard in which bass and piano create spontaneous counterpoint before coalescing in unadulterated swing for the end.

Another Magris tune, Clef Club Jump, is a tribute to James Reese Europe’s Harlem society for black musicians, founded in 1910. It relies on a whole-tone vamp with shades of Debussy and later grafts on freer expostulations, redolent of Cecil Taylor. The faithful treatment of Eubie Blake’s Memories Of You is a relaxing contrast with a rhapsodic solo from Hochberg.

The Time Of This World is a smooth-swinging bluesy vamp plus changes in three by the rather obscure pianist and composer Billy Gault (associated with Gary Bartz and Jackie McLean) that shows the influence of 50s/60s soul-jazz players, such as Bobby Timmons and Les McCann.

Quiet Dawn is maudlin modal lament by Cal Massey from Archie Shepp’s Attica Blues (1972). Hochberg takes the melody on arco bass which increases the lachrymosity. But then it has a bright four-to-the-bar bridge. It’s a curious, symphonic, shape.

There are two readings of Andrew Hill’s La Verne (first appearing as Verne on his 1963-recorded, 1968-released Blue Note album Smoke Stack but here inspired by the version named La Verne on Hill’s 1986 Soul Note album Shades). In contrast to the rhythmically somewhat lopsided original, Magris has smoothed Hills’s edges, and it comes across as lush, meandering ballad that at times suggests Jerome Kern’s A Fine Romance. The naming debate is intensified by its appearance here in Bill Milkowski’s very good liner note as La Verne, and on the back cover as Laverne. The original dedicatee, and inspiration, was Hill’s first wife Laverne Gillette.

Things get more propulsive with the sweetly swinging minor modal Anysha, which gives Magris a chance to show off his considerable and fluent hard-bop chops along the Evans-Tyner axis. For me this is the most engaging track in the set. Italy is reflectively Latinate before Blake’s The Chevy Chase reintroduces a firm pulse, albeit of the rhythmically squarer stride variety.

Shuffling Ivories may not win any prizes for innovation or great individuality, but it provides a tuneful hour of accomplished piano and bass playing and insights into the less visible byways of jazz piano.

Francis Graham-Dixon - 24 April 2019
According to the promotional material, the music juxtaposes the harmonic sophistication and improvisational approach of jazz with the rhythmic complexity of modern rock and metal, resulting in a sound...