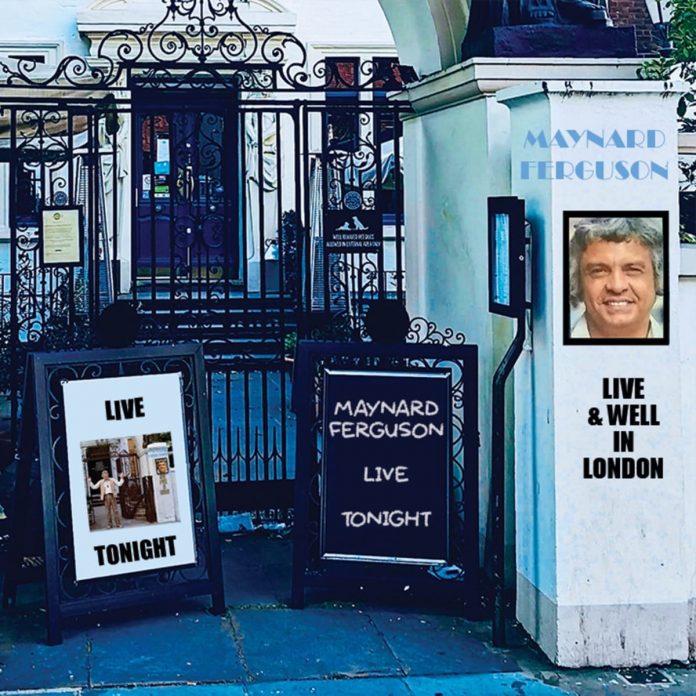 This ill-produced compilation leaves a lot to be desired and should carry a health warning regarding the temporary deafness that can result from listening to relentlessly screaming trumpets – with Maynard the main offender. CD1 was only recently discovered on tape in a box with “100” written on it. Possibly recorded at the 100 Club in London, it has a cover photo showing him posing outside The Pheasantry in the Kings Road. (During his four year stay in the UK, Ferguson also fronted the house band on the BBC’s [Simon] Dee Time TV programme, based on Johnny Carson’s infinitely superior NBC Tonight Show, with Clark Terry in the orchestra.)

Other anomalies and shortcomings include self-congratulatory, vacuous and semi-literate sleeve notes by arranger Keith Mansfield, who clumsily admits that CD2, recorded at Lansdowne Studios, chose “pop tunes, but still make it of quality”. The listing of the participating musicians fails to identify the instruments played by the “Sax” section, and on neither disc are the contributions of individual soloists listed.

Poor proof-reading results in the composition Stony End on CD1 also appearing as Stoney End on CD2. The “Indian Musicians” Vemu Mukunda and Mohana Lakhimpathy are not credited with their respective instruments of choice. Although Ferguson himself makes lengthy announcements (to much audience laughter) on CD1, they are practically inaudible.

Almost last (but not least) the recording quality on both CDs is ill-balanced. More troubling is the failure to give composer credits to any of the tunes of both albums. Critic Jack Kenny also doubts “the integrity of using a cover from a previous CD from another company” and adds caustically (if slightly unfairly) “we are told that it is a limited edition of 500 CDs worldwide. Perhaps as well such shoddy production is limited.” It could, of course, become a collector’s item.

In fact, some of the performances on “Live Gig” (CD1) do convey the band’s obvious enthusiasm and the audience’s appreciation, but the “jazz-rock” treatments of such titles as Big Dicker, Aquarius and Spinning Wheel quickly become monotonous. The best track by far is a loping and richly textured interpretation of the Benny Golson original Whisper Not. The sections are well integrated and a ravishing trumpet solo is almost certainly by Ferguson.

“Studio Out Takes” (CD2) begins with the first of three takes (enough already?) of Living In The Past. There is another on CD1 with a pyrotechnic Maynard booted along by heavy drumming, screaming brass and a tasteful but anonymous altoist (suggestions welcome). Paul Simon’s wistful Bridge Over Troubled Water receives a lugubrious treatment, but Laura Nyro’s composition Eli’s Coming although “noisy” has a certain charm – including a sensitive but again uncredited flute solo.

This is a sloppy, disappointing and non-essential Fergusian venture; better stick with his inventive, tasteful 1950s recordings, with Maynard Ferguson: Verve Jazz Masters 52 and The Birdland Dream Band leading the pack.

Bruce Crowther - 08 August 2021
It is impossible to overstate the importance of Coleman Hawkins in the history of the saxophone in jazz. He was the pathfinder, standard-setter and, until the arrival of Lester...