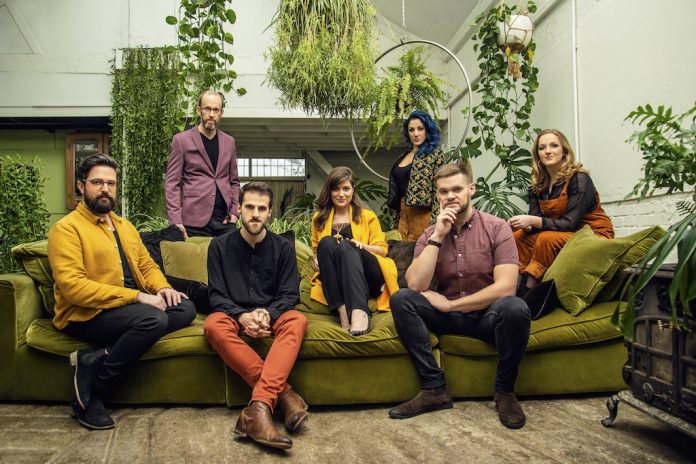 Born into a musical family in Mobile, Alabama, in 1927, Ward Lamar Swingle (his real name) graduated from the Cincinnati Conservatory in 1951. He and fellow student Francoise Demorest both gained scholarships to study in Paris and married there in 1952.

Swingle helped to form Les Double Six which vocalised big band classics by the likes of Woody Herman, Count Basie etc and it occurred to Swingle that this technique would work just as well with classical music. That led him to form The Swingle Singers in 1962, comprising two sopranos, two altos, two tenors and two basses, eight voices supplemented by double bass and drums. They disbanded in 1973 and Swingle moved to London and immediately formed a new group. Over the years people left and were replaced seamlessly.

In 2011 the octet became a septet and that’s how it has remained to this day. I met two of the group – Oliver Griffiths and Edward Randall – in late September.

Oliver, who joined the Swingles in 2010, recalled the downsizing: “In September, 2011, Lucy Barley, one of the altos, left the group and wasn’t replaced. We spent several weeks rehearsing as a septet and found that as far as the public was concerned there was no appreciable loss of quality. From the inside we found it easier to function and much easier to hear what the rest of the group was doing”.

I went on to ask about charts – did they have a regular arranger or even a pool? “Everyone contributes”, replied Edward. “All of us have formal training, if not in the same fields. Some of us have classical backgrounds, some jazz or choral training and again, all of us can and do contribute original compositions which now comprise a large part of our repertoire”.

The band work consistently, but I wondered if it was as much as 40 weeks a year.

“It doesn’t work quite like that”, said Oliver. “In a good year we’ll do 80 to 90 gigs and even in a bad year we’ll do 60, which is more than one a week but we are essentially a touring group. We average about two gigs a year in London and we’d like to double that, something like one every quarter”.

“Ultimately”, added Edward, “we spend the bulk of our time in the USA. They actually teach us in music schools there”.

The main reason we were talking was because they getting ready to play the London Jazz Festival in November. “We’re very excited about that”, said Edward. We have a programme that’s heavy on jazz and popular music. Kurt Elling has written a great introduction to In The Wee Small Hours Of The Morning and I’m really looking forward to that. Elling is very talented and we work with him as often as we can”.

Andy Hamilton - 07 September 2021
Gary Bartz, born 1940, is one of the great alto saxophonists of the post-bop era. His 1968 album Another Earth, featuring featured Pharoah Sanders and Charles Tolliver, had synthesised spiritual and space...