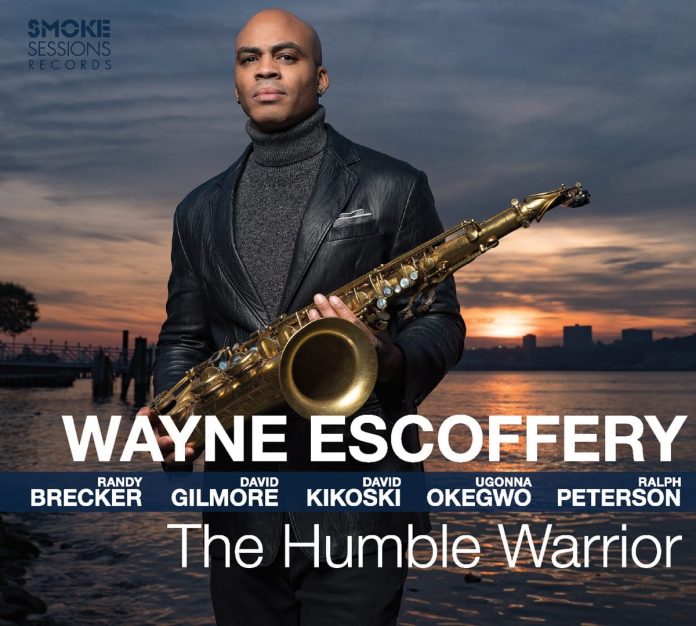 Trumpeter Randy Brecker and guitarist David Gilmore join them on some tracks, including Escoffery’s arrangements of parts of Benjamin Britten’s Missa Brevis In D. The album is dedicated to the great jazz musicians who died in 2018-19.

Escoffery has a big sound on tenor, and is an eloquent improviser. He’s performed with Herbie Hancock, Abdullah Ibrahim and Eddie Henderson, been a member of Mingus Dynasty, and worked with Tom Harrell for over a decade. In addition to his quartet, Escoffery co-leads the Black Art Jazz Collective. Since 2016, he’s been a professor in the jazz department of Yale School of Music.

I heard him at Koktebel Jazz with Tom Harrell, and very recently at a compelling gig by his own group, live-streamed from Smoke – as part of a series which I totally recommend for its excellent sound and vision.

The opening composition, Chain Gang, was inspired by the Ed Lewis blues, I Be So Glad When The Sun Go Down. There follow four tracks of arrangements of Benjamin Britten’s Missa Brevis In D which the saxophonist had sung as a child. For the opening Kyrie, he plays Britten’s vocal motif as a free introduction; his 11-year-old son Vaughn is vocalist on the Benedictus. This is “jazzing the classics” of a high order, but my favourite tracks are the originals that follow, excellent vehicles for the group’s effortless mastery of improvisation.

Undefined is an outstanding composition by bassist Ugonna Okegwo, with a theme reminiscent of Wayne Shorter; pianist David Kikoski’s Back To Square One reminded me of the later work of Art Blakey’s Jazz Messengers. Classic state-of-the-art mainstream postbop.

Roger Farbey - 21 March 2019
In 1992, the Mike Westbrook Orchestra was invited by Associazione Catania Jazz to feature in a three-day festival, originally to be located in the Roccanormanna di Paternò amphitheatre near...