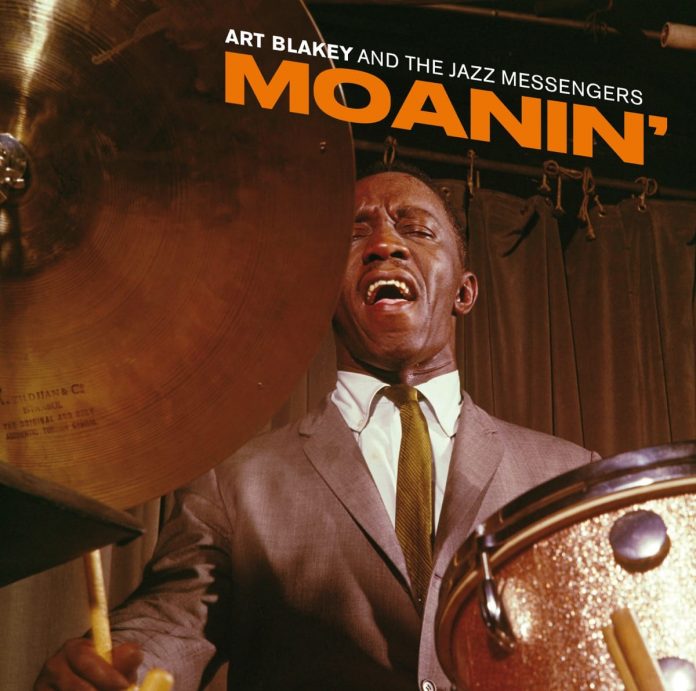 What is it that made this session the single most famous and attractive album of the Messengers? I think it boils down to the creative compatibility of these five musicians along with the high quality of the material on offer.

First up is Moanin, the funky call and response blues by Bobby Timmons. At breaks in rehearsals Timmons was forever noodling away at the melody until a band member begged him to put a bridge to that, Bobby. So, he did. Lee Morgan made it groove and sizzle with a typical roaring solo, all explosive brass lines studded with slurs and squeals. Benny Golson takes the heat off briefly with a measured, lyrical tenor solo that makes a neat contrast, but Timmons throws in all the blues licks to heat it up again and, of course, Blakey is stoking the fires all through.

Although the original Blue Note LP was issued as Art Blakey & The Jazz Messengers, Blue Note 4003, it became known ever after as Moanin’.

Along Came Betty is an attractive ballad written for the date by Golson, but he also helped fire up the band with The Drum Thunder Suite and Blues March, both designed, successfully, to showcase Blakey’s skill as a soloist framed by melodic interludes from piano and horns. He also wrote Along Came Betty, another attractive line which again points up the successful pairing of Morgan and Golson through their different approaches. No Messengers date would be complete without a good standard and here it is Arlen and Mercer’s Come Rain Or Come Shine.

Although the original co-op Messengers with Dorham, Mobley, Silver and Doug Watkins is arguably the best of them all, Morgan proved to be the ideal trumpet player for the group and this band with Timmons and Golson was the most popular. Morgan struts impressively on every track, blowing technically precise but always inventive solos. The contributions of Golson, Timmons and, last but not least, Jymie Merritt on bass are crucial to the success of the programme. Blakey had more solo space than he usually allocated to himself, but he used it well, keeping it explosive but in context. Overall, this is one of the best Messenger units reaching their peak on record.

This reissue is a particularly good one with an attractive, colourful cover featuring an appreciation by JJ contributor Brian Morton and clear, open sound on 180-gram bright red coloured vinyl. It also offers two extra tracks of the band at the Olympia, Paris a month later. Timeless jazz.