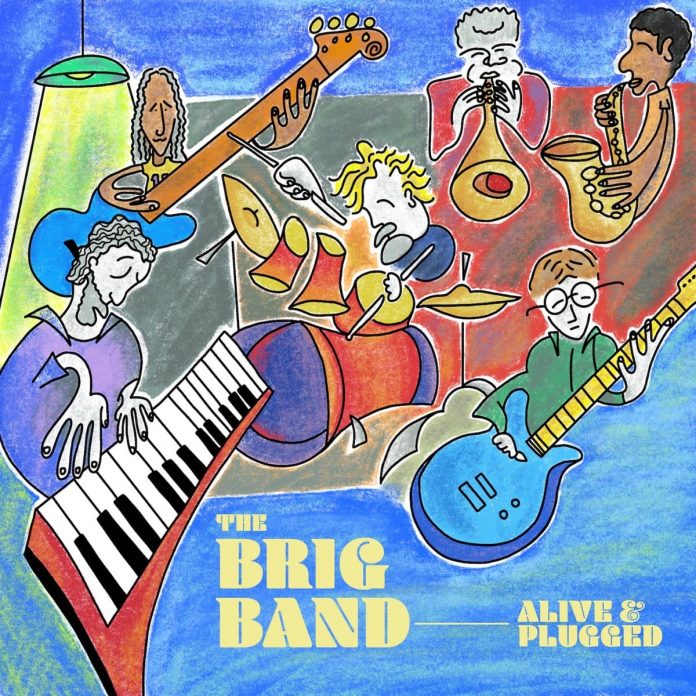 West Coast ensemble The Brig Band, who take their name from a bar in Venice, California where they formed in 2002, release their first album after nearly two decades of performing live.

The album opens with Wah-Di-Dah, which takes a very 70s funk riff on warm and fuzzy keyboard and bass, and then gives way to splayed chords and harmonics on guitar and solos from sax and trumpet, followed by a superb synthesizer solo. The atmosphere is maintained into the next track, with more dense keyboard, guitar and bass rhythm, a horn section melody being followed by a series of solos. On the third song however, the jazz influence starts to become more noticeable, the horn section’s melody is more complex, and the drums switch from the previous funk/rock beats to a more varied and percussive 6/8 rhythm.

The album also features two covers for the eighth and ninth tracks, Miles Davis’s Milestones and The Police’s Spirits In The Material World. The Davis cover is played in a fast groove with the energy of a live band, and on the Police track, the band emphasise the reggae influence present on the original, with reverberated horns and warm organ. The final track, Brigmarole, is a solid funk piece built around a five-note riff, with the band building in intensity as it progresses.

The sound of the album is brilliant, and the expert musicianship really stands out. Drawing mainly on funk and jazz, but with plenty of other influences, The Brig Band’s Alive & Plugged is definitely worth checking out.

Nic Jones - 21 April 2020
Glasser refers to what he sees as a never-ending struggle between anarchy and hierarchy in the notes on the double gatefold sleeve for this CD, but considering this is...