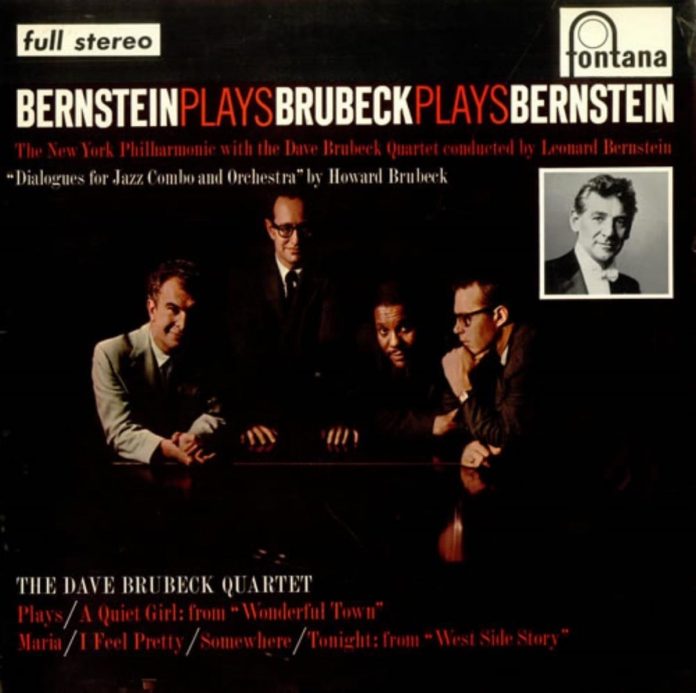 Side One of the LP is a composition by Dave Brubeck’s brother Howard, played by the Brubeck Quartet and the New York Philharmonic conducted by Leonard Bernstein. Although the liner notes do not say so, presumably it was written specifically for the quartet – one cannot imagine the Jazz Messengers fitting in so well with Bernstein’s straight musicians!

The basic outline of each movement is the same: an introductory theme stated either by the orchestra or a member of the quartet; improvisations by alto and/or piano, usually with string backing; and a final orchestral part restating the original theme. The result is a monumental exercise in boredom.

The second side is better, with the quartet giving a run-through of four of Leonard Bernstein’s tunes from the score of “West Side Story”, whilst on the fifth track Brubeck plays “A Quiet Girl” from “Wonderful Town”, with bass and drums only. Even by Brubeck’s standards this is very routine impro­visation. The stereo recording is finely separated.

“Camptown Races” is mainly a feature for Brubeck’s piano playing, whilst “Basin Street Blues” also includes some typically genteel, whimsical alto from Desmond. Morello and Wright take up most of the solo space on “Bread” and “River” respectively. Nothing particularly stimulating happens here, but at least the drum feature does not go on long enough to get boring.