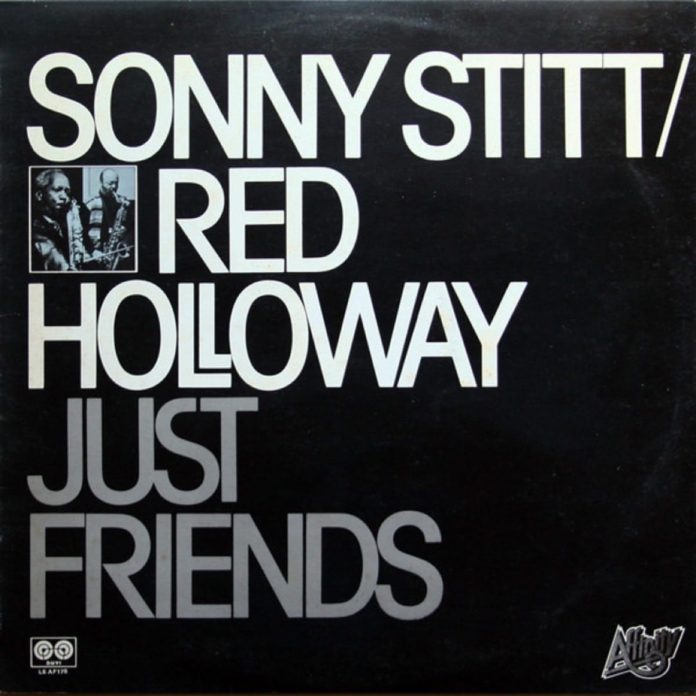 Stitt and Holloway have been play­ing together on and off since at least 1967, so it is particularly irritating that the sleeve quotes no recording date for this issue, and I’m sorry but I have not been able to find it out either.

Another annoying thing is that the sleeve note, half of which is irrelevant to this LP, gives no guide to which soloist is which. Often this does not matter, but Stitt and Holloway have tenor styles which are so similar that it takes an expert to tell them apart. Decent stereo might have assisted identification, but the stereo separation is minimal. My guess, for what it is worth, is that the recording is fairly recent – within the last five years – and that Stitt is the one slightly to the left, with the somewhat more relaxed approach – the one who takes the second set of choruses on Lester Leaps In.

As two-tenor sessions go, this one is good, though not in the class of great pairings such as Al Cohn + Zoot Sims or Coleman Hawkins + Lockjaw Davis. The soloists certainly have that almost telepathic sense of what the other is going to play which only the best jazzmen develop. Indeed, Just Friends is a tour de force of this kind: though played in traded fours, the continuity is such that it could have been by a single musician from beginning to end. This is the high spot of the LP.

Lester Leaps In is en­tertaining in that each saxophonist displays his command of Prez’s trade-mark phrases while building them into coherent solos, but on this, as on other tracks, things become a little mechanical as soon as the theme is disposed of. If you were to break into the middle of Chillun’ (not into the arco bass solo, of course), or into The Way You Look Tonight, or even into the main part of Lester Leaps In, you would find the phrasing almost inter­changeable.

Partly it is a matter of tempo: the musicians seem impelled to declare their boppiness by bearing down on the themes, speeding them up and delivering them harshly, so that they may get them over with and work the changes. Well, to some that is what jazz is about – but the greatest musicians transcend fashion and make great music as well. Perhaps I am taking it all too solemnly – it adds up to a good blow with Just Friends outstanding. The last two tracks of side 1 are the ballad reliefs: Holloway on rather shrill alto for the first, Stitt on con­voluted but nice tenor for the second. Altogether a dazzling rather than satisfying issue.

Vanessa Rubin: The Dream Is You

Bruce Crowther - 17 June 2019
The subtitle of the record is Vanessa Rubin Sings Tadd Dameron. A highly significant presence in jazz, if perhaps more for his composing, teaching and influence than for his...