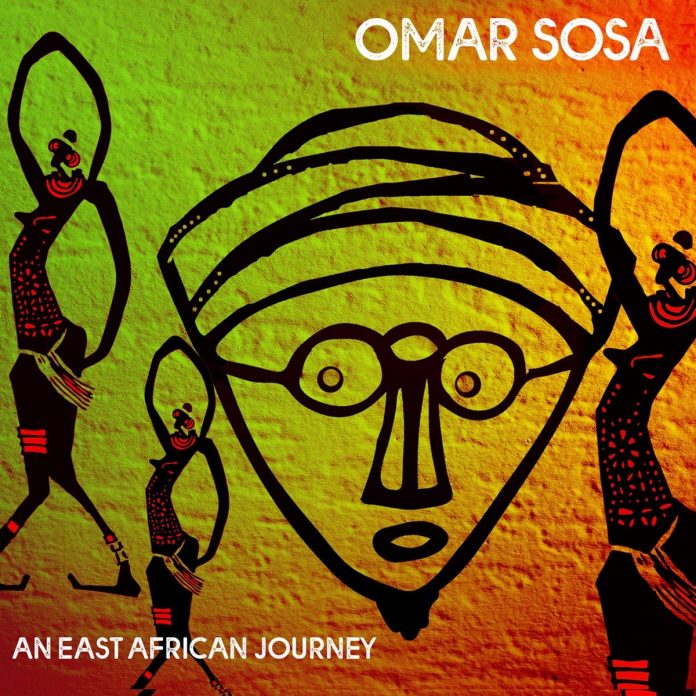 As the extensive and informative sleeve-note (credited to one DSP) documents, the origins of this release – as poetically compelling as it is rhythmically energising – lie in the tours of East Africa which Sosa undertook at the end of 2009. The experience was richly rewarding for Sosa and generated both concert and field recordings. Some years later, Sosa and his long-term collaborator Steve Argüelles – if you don’t know it, check out Argüelles’s drumming on Sosa’s Mulatos from 2004 – went into a Paris studio and worked on and with the material, leading eventually to the music that is An East African Journey.

The music and the mythos of Africa have always been integral to Sosa’s art. One thinks of his longstanding Quarteto Afro Cubano; of the potent Ceremony and Eggun, two of his finest recordings, or of his collaboration with the Senegalese musicians Mola Sylla (v, multiple African instruments, pc) and Seckou Keita (kora, v, pc) on (respectively) The Promise from 2006 and Transparent Water from a decade later. On the sleeve for the superb live recording that is The Promise – featuring, a.o, Paolo Fresu (t, flh) Leandro Saint-Hill (f) and Childo Thomas (elb, v) – Sosa writes: “It is Afreeca that has given to us / It is Afreeca that gives to us / Afreeca is our mother / Afreeca is the root”.

The nature of that root, as Sosa has long been aware, is that it has generated a multitude of related yet diverse musics. In a short film about this East African project, Sosa says that, while there is plenty of percussion on the album, he wanted to ensure that appropriate exposure was given to other factors such as vocals and string instruments. The result is a cornucopia of warmly resonant music, featuring compelling, diversely cast vocal repetition, both solo and group and most often in call and response format (sample Thuon Mok Loga, Che Che, Veloma E and Meinfajria), melodic intricacy (Eretseretse, Shibinda), broad, rolling and cooking rhythms (Elrababa, Dadilahy) and rapt rubato reflection (Tizeta, Sabo).

Throughout, Sosa’s piano, kalimba (African thumb piano), atmospheric keyboard textures and adroit rhythmic touches are integrated both sensitively and seamlessly with the East African material. On the concluding Ravann Dan Jazz, recorded in Mauritius with Sosa in duet with the vocalist and large frame drum master Menwar, the music attains the kind of mesmeric, pulsing mythopoetic presence that marked Calling Eggun, the haunting final track of the surpassing 2012 Eggun from Sosa’s Afri-Lectric Experience.

A wonderful, completely life-affirming experience, An East African Journey is an album to set next to Coltrane’s (very different, but equally superb) Kulu Sé Mama from 1965. If music gets any better than this, I’d sure like to hear it.

Peter Gamble - 16 November 2021
This double disc has been released to mark the death of Miles Davis 30 years ago and completes the trilogy of the “Lost” series, following on from The Lost...