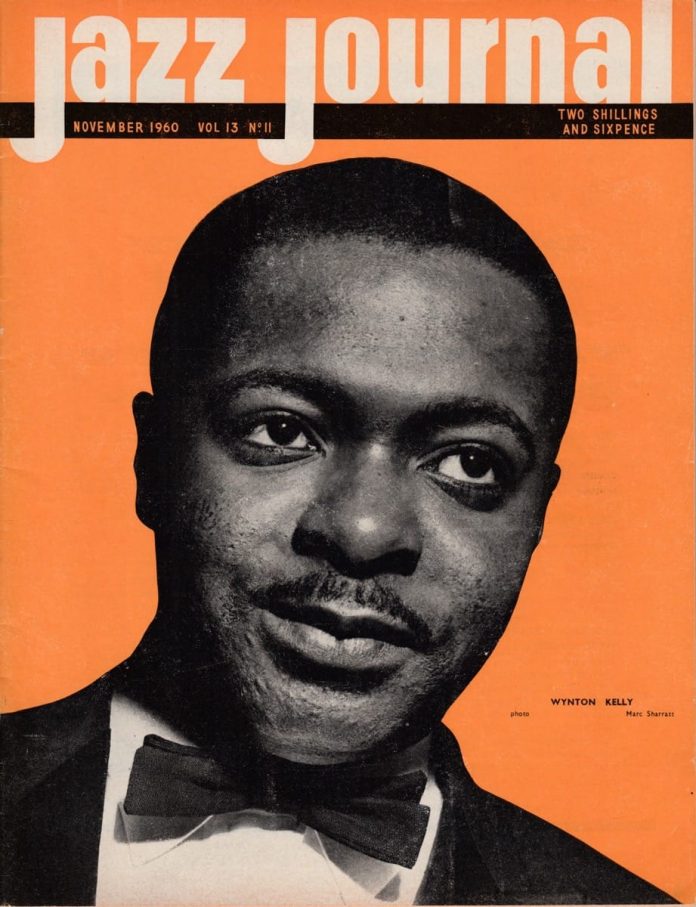 This is one of a series of taped interviews with musicians, who are asked to give a snap opinion on a set of records played to them. Although no previous information is given as to what they are going to hear, they are, during the actual playing, handed the appropriate record sleeve. Thus in no way is their judgment influenced by being unaware of what they are hearing. As far as possible the records played to them are currently available items procurable from any record shop. Wynton Kelly first attracted attention when he started to play with Dizzy Gillespie in the early ’50s. He was accomp­anist to Dinah Washington for several years and visited this country as pianist with the Miles Davis group. He is a young musician, with a broad outlook who can and does play many varied styles of piano. Although is by nature left handed, he says his left is his piano playing weakness. – Sinclair Traill

“Gone With The Wind”. Art Tatum-Ben Webster. Columbia 33CX 10137
Well, anything with Tatum is bound to be good with me. You just have to put him on one side – he was by himself as a pianist. I heard this album once before, just before we came over, to be exact, and it hit me then. It’s wonderful! Funnily enough, those opening chords might have been played by Teddy Wilson, but only at first. After he gets down to playing there’s no missing who he is. Tatum did more with a piano than any other five men. I met him personally just before he died, and was looking forward to seeing him again when he came to Cleveland, but when he got there we heard he had been taken sick. Sad, sad. Doesn’t Ben Webster make a beautiful sound? Big, slow, and never gets over-sweet, if you know what I mean. We heard Don Byas recently – he plays wonderful – great ideas and that big tone…

“Air Mail Special”. Tiny Grimes-J. C. Higginbotham (“Callin’ The Blues”). Esquire 32-092
That was a nice goin’ thing. Eddie Davis is great! I worked with him for the whole of ’49 and part of ’50. It was Eddie’s own band and we had a ball, a great time. We had a bass player called Franklin Skeetes, was once with Don Byas, and a drum­mer, Lee Abrams (brother to Ray, who played tenor in Dizzy’s big band). Just four pieces, very jumpy. Eddie kind of swings you along, you know. Oh, I enjoyed playing with him. Very different kind of thing to playing with Miles, but I love Eddie’s playing – forceful. And he sure is an amusing guy; he makes you laugh all the time. I liked Ray Bryant there, too. He’s doing very well now … plays what he wants to play and has his own style – neither way back or too modern, just his own. I admire him very much for being able to play that way. Very few young pianists have the ability – or the wish – to play like that, to mix the styles. Ray really gets with those blues, and that’s basic, isn’t it? Must give him full credit. Tiny Grimes – we worked opposite him recently and I listened to him a lot. He’s a funny guy, but he swings all night.

“Thou Swell”. Benny Carter-Earl Hines. Vogue LAC 1222S
Man, that cat Carter can play anything! And anything Benny does, I love. We worked with him in 1955, at the Moulin Rouge in Las Vegas. Man, he had a great band – a big band. Most of the men were from the West Coast, people like Harry Edison. Jimmy Cobb and I were working with Dinah Washington and we used to listen to Benny every night. And that’s Earl Hines, isn’t it? I heard him out there on the coast, and I think he’s great. He really has a style of his own. I’m the sort of person who loves all those great musi­cians. I was just coming out in the early ’40s, and was kind of in-between the old and new eras, and I am glad I had the chance to hear such guys as Earl, Ben Webster and those others. It was good to be around then ’cause I got a taste of that and a taste of this. There are very few of these artists that I didn’t admire; just about all of them were … well, perfect. That goes for Ben Webster, Coleman Hawkins, Budd Johnson, Lester, Roy Eldridge, Earl and, oh, just about all the great musicians from that era.

Monk’s piano was weird in there – not suited. Duke’s tune, isn’t it? An old one I don’t know. I like Monk better as a composer than a pianist – he has written some beautiful things

“Black And Tan Fantasy”. Thelonious Monk. London LTZ-K 15019
Ah-ha, three of my old buddies, Kenny Clarke, Oscar Pettiford and Monk. Very sad about Oscar; I was cut up when I heard about him. Monk’s piano was weird in there – not suited. Duke’s tune, isn’t it? An old one I don’t know. I like Monk better as a composer than a pianist – he has written some beautiful things. Sometimes he plays pretty, but personally I just prefer to listen to the things he’s written. Incidentally, before I looked at the sleeve I thought that was Randy Weston when it first started – he plays like that and does it good, too.

“Weary Blues”. Duke Ellington-Johnny Hodges. HMV CLP 1316
Well, that was Duke, from the very first note. I guessed him right away. When was that made? It was very good – so easy. I love Sweets in there. I was supposed to join him some time ago, when he brought a group to New York, but I was called back to Dizzy, I think it was. In fact, for the last eight years I’ve been between Dizzy and Dinah, six months here, six months there, back and forth. Johnny Hodges was wailing in there, wasn’t he? You’d know him anywhere. He’s another one of those great artists from the era I spoke of earlier. You very seldom hear Duke play like that … not often in a small group. He is a good pianist, real good. Do you notice how he keeps out of the way all the time? He lays back until he can time his chords to best advantage. It’s great back­ing for Hodges. But Duke was always like that – he never overplays; and he’s like that in real life. Quite an amazing man. He has a great new band now. They’ve dragged some of the old stuff out of the book and it sounds good.

“Quince”. Count Basie (“One More Time”). Columbia SCX 3284
That was very clever. It sounded like a Quincy Jones tune and arrangement, but I know the tune was by Sonny Stitt and that the arrangement was by Frank Wess. Quincy writes those little things – they have something all of their own. Sonny wrote this thing for Quince and it came out like it was one of Quincy’s own. The band are the number one swingers. Man, when they hang onto one of those slow, easy tempos, they just swing. You can catch that band in one of its tired moments – you know, just come from a long trip, all tired out – but they’ll sit down and make it like dogs – they swing. Dizzy’s big band was also like that, a great and happy band. Melba Liston did some good writing for him. Unhappily, I couldn’t do the trip they made out East; Walter Davis went with them and played very well – he fitted in. Well, the record: Basie’s tricky. You never know when he’ll stretch out. He’s liable to catch you out if you’re not paying attention. Most of those old-timers were like that – tricky. They had it all. Catch ’em on a good night and – whamm! – they’d go! Doesn’t happen so much now.

“Bad Case Of The Blues’. Dinah Washington. Mercury MMC 14048
That’s not Dinah’s music; that’s made for hits. These fiddles and choruses and things don’t fit with her; she’s a powerful singer and she knows. Speaking of Quincy Jones just now reminds me of when we were in Las Vegas – a parcel of new arrangements arrived from Quincy, and we went to try ’em out. Dinah took a look at the first one and straightway started raising hell. In no time she was on long distance to New York. The arrangements weren’t by Quincy! He had been too busy and had passed them on to someone else – I forget who. Dinah knew, first look at them. But she forgave him.

I never really had a chance to listen to Jelly Roll before. It was alright, but the beat was kinda choppy; and that banjo … However, it goes nicely in parts – the trumpet had ideas.

“Blue Blood Blues”. Jelly Roll Morton. HMV No. missing
I never really had a chance to listen to Jelly Roll before. It was alright, but the beat was kinda choppy; and that banjo … However, it goes nicely in parts – the trumpet had ideas. Of course, the recording doesn’t help any. Did you ever hear Goldie (Don Goldie), plays with Teagarden? I was in the army with him and he plays really well, fine technique, good tone and everything. He does an imper­sonation of Louis that would kill you, man – it’s Pops to the life. And Pops – now there’s number one old-timer. What a man! I guess he’ll just die right there on the bandstand, that’s what he’ll do.