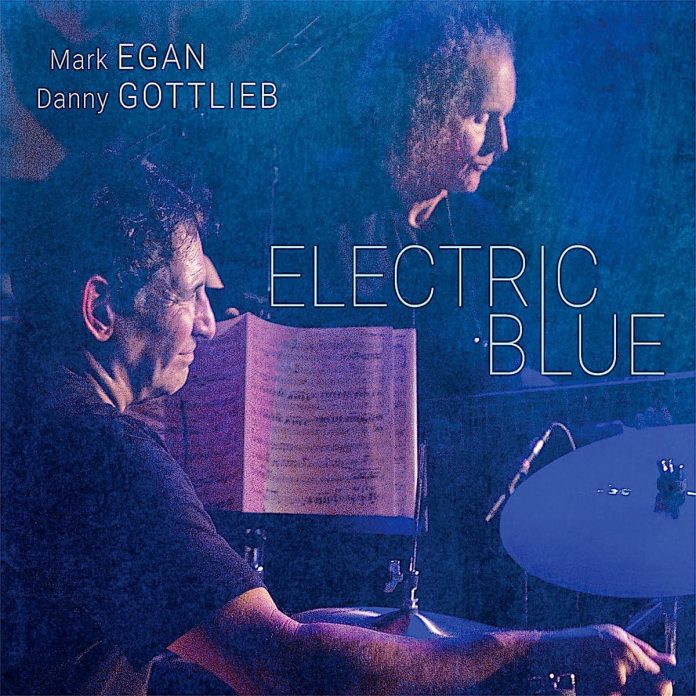 I have fond memories of the now rocking and driving, now airy work of Egan and Gottlieb in the Pat Metheny group of the late 1970s which featured Lyle Mays (p, kyb). Following the Pat Metheny Group ECM recording of January 1978, the band played one of the highlight gigs of Camden Jazz Week at London’s Shaw Theatre. Decades on, Gottlieb was in equally commanding form when I heard him kicking and caressing Metheny’s 2015 big band tribute to Eberhard Weber at the bassist’s 75th birthday concert in Stuttgart, subsequently released on ECM as Hommage.

In between, I’ve enjoyed several of the recordings by the Elements band which Egan and Gottlieb co-led, including 1987’s Illumination on Novus/RCA. Anyone who has relished the interplay of Egan and Gottlieb on the meditatively stepped, Metheny-like melodic sweep of Himnalays, the opening track of that album, will not want to miss the superb sequence of duets which is Electric Blue. Surprisingly, it’s the first such album from a pair whose playing history together runs back half a century or so. But as the cliché has it, it was worth the wait.

Co-credited to both men (with the exception of Egan’s Cabarete) the music is as questing in nature as it is consonant and melodic, equally strong in rocking and bubbling grooves (Back and Forth, Cabarete and the short, “garage”-like Hookey) as it is in etched melodic arc and expansive rubato texture (Blue Sound Bath, Offering). Hear all such qualities coalesce in Come What May, or enjoy the transition in the title track from ad libitum drums and spacious, ringing bass harmonics to potent bottom-register grooves fired by Gottlieb’s increasingly multi-planed dynamics.

Beautifully recorded with a sensitivity to yearning bass-blue depths and gossamer cymbal overtones alike, the session brings out every nuance of Egan’s personal, richly rounded sound and thoughtful, singing pizzicato lines, interwoven with Gottlieb’s diversely layered yet practically melodic figures. A distinctive and thoroughly enjoyable album which, while clearly in the post-Metheny vein, establishes and sustains its own resonant identity from first note to last.

Nigel Jarrett - 24 June 2019
Stephane Grappelli's position in the acoustic Quintette du Hot Club de France was interesting. As the stand-up flamboyant, a lone violinist in an all-strings jazz band might be expected...