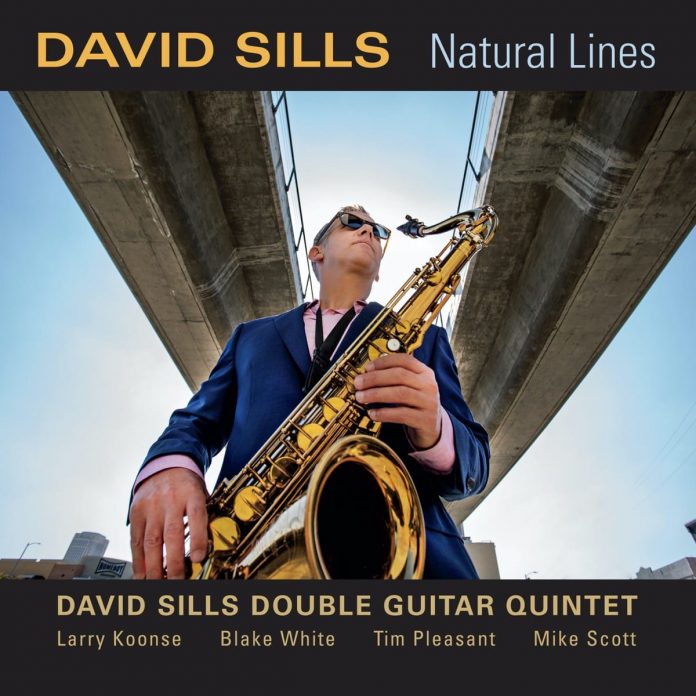 Saxophonist David Sills’ Natural Lines is his 17th recording as a leader and it is predominantly full of swinging, upbeat tracks, sure to put you in a good mood. Sills has recorded extensively with guitarists Mike Scott and Larry Koonse in the past, so a well-developed musical rapport is evident. The guitarists join Sills’ core trio of bassist Blake White and drummer Tim Pleasant.

Sills explains in his liner notes that the demand for two guitars and no piano came about “in recent years [where] most of [his] performances have taken place in venues where no pianos were available, so to fill the role of the missing piano, I began adding a second guitar”. The sound is a bold and unusual, radiating beautiful melody as well as high harmonic energy.

Sills’ musical skills shine through on both his saxophone and alto flute playing. An impressive aspect is his ability to display his skills in so many different styles throughout Natural Lines. His talents are especially clear on the slow and lilting arrangement of the samba-like Quiet Is The Star. The seventh track Mellow Stone has a meditative quality to it whilst emitting a certain moodiness. This contrasts hugely to the hard-hitting opening track Minor Monk, composed by the group’s own Scott; Koonse brings a more soulful approach with his addition to the album, Sync Or Swim.

As well as embracing seven new compositions from multiple players on the album, Natural Lines presents new arrangements of jazz classics like Miles Davis’s Nardis as well as Bill Evans’ Interplay. Perhaps the most exciting and distinctive track is All The Little Things, a mesmerising and experimental free improvisation which has no rhythm accompaniment. David Sills’ Natural Lines is a really wonderful creation with top-notch musicians all maximising the intrigue and empathy at the heart of good jazz.

Bruce Crowther - 14 July 2020
Born in Germany, which is where she first studied, Herzig has been primarily resident in the US since the late 1980s. There, she studied at...