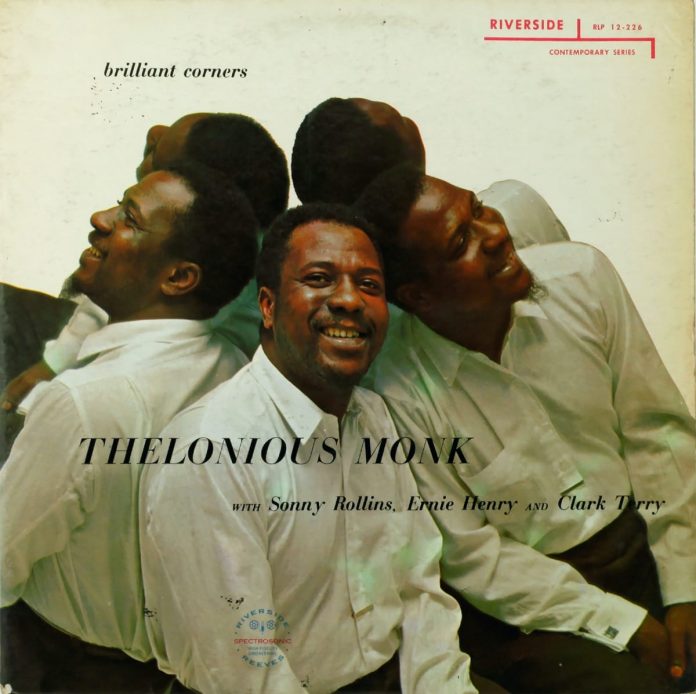 Pianists are more open to criticism than most jazz soloists, and I consider that Thelonious has, in his time, had his full share, ranging from epithets for his eccentricity to more serious ones where he is rated as a poor technician. I sincerely believe that this period of misunderstanding is past, and that musicians and public alike have begun to assimilate the important contribution he has made, and is still making, towards the advancement of jazz on a logical basis.

Critics as a whole have been more outspoken in their praise or defamation of Monk’s work, and cannot therefore be regarded as a rational cross-section of public opinion, since they are notoriously bad at eating their own words.

Having said this, I am now free to make my claim that “Brilliant Corners” is not only one of the three best records he has had released in Britain, but is also my personal choice as a “desert island disc”. The first three tracks, all Monk originals, are brim full of that curious angular phrasing which he likes so much. The blues track is fascinating, with solos all round, the honours going to Pettiford’s bass work.

“Surrender” is a piano solo, not perhaps Thelonious’s best, but intriguing for its contrast to the rest of the session. It showcases his extreme simplicity, that “reductio ad absurdum” in terms of notes and harmonies, which in some ways is his biggest hallmark.

“Pannonica” finds him on celeste being nostalgic to a surprising degree.”Bemsha” drops the alto, replacing it with Clark Terry in an invigorating piece which provides Max Roach with the opportunity to exercise himself at, or do I mean on, the tympani! Rollins, who has worked with Monk on previous occasions, is strident but exciting in his solos, and seems to be one of the most compatible partners for the great pianist.

But one must always return to the title piece for the final analysis. The theme is written in varying tempos, which makes it a real test of the soloist’s ability to recreate the same digressions. It is in some respects a restless composition, but it is so typically Monk’s that I find it almost impossible to put down.

I have lived with this record for three years – it was formerly issued on London – without tiring of one note, and I have come to accept it as the yardstick of Monk’s work, both as writer and pianist.

Nigel Jarrett - 03 December 2021
European jazz has long been self-sufficient and relatively free of enthralling American models, and Danish pianist Thomas Clausen is an emphatic example. Wide-ranging in his musical interests and tastes,...

Jazz Journal - 25 April 2021
The Connection may have added in­sult to injury as far as the linking of jazzmen and "junkies" is concerned, but it has done the public a good turn with...