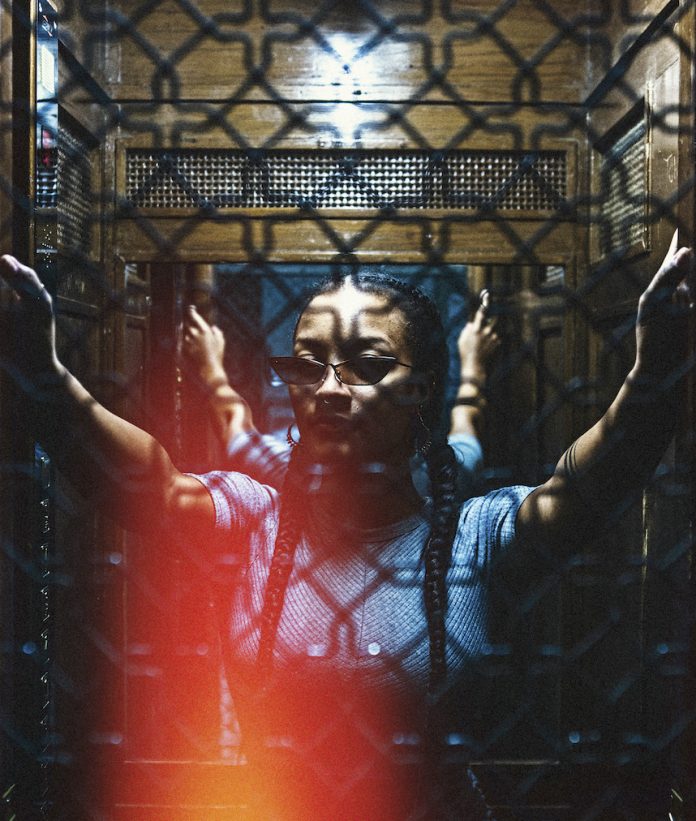 With an expectant buzz in the air, a vibrant, mixed crowd gathered at Komedia, 5 March, awaiting one of the most talked-about young tenor sax players of the past year. Ever since her first appearance at the Brighton Dome  in A Change Is Gonna Come in 2018, with former Young Disciples vocalist and songwriter Carleen Anderson, and her  double bass player Daniel Casimir, Nubya Garcia has been putting together her own quartet for this show before a tour to promote their new album When We Are. Looking around, it’s an unprecedented turnout for a jazz gig at this venue.

A still figure, long braids held back by a black scarf, Garcia, like a true Nubian queen, projects a regal presence on stage. Under the spotlight she wields her instrument with authority, nevertheless projecting a charm and freshness which intrigues her audience and draws them in. Her playing has a compellingly spiritual sound and a cosmic quality,  the same global all-embracing appeal, encompassing many different genres of music, which earmarks her as the next female Coltrane – by me, anyway.

She opens the set with “Fly Free” and “Lost Kingdoms” from her first album 5ive, which show her in smooth and mellow sax form,  but with edges of raggedness and hurt, climbing to poignant crescendos and sliding back down to murmuring lows. “Pace”, written especially for the new album, was composed as a reminder to herself to stop and breathe amidst life in London: it’s calm, existing in its own space, emotionally intelligent. On this piece, Armon-Jones comes into his own as a dexterous, sensitive but commanding player, who makes his keyboards sing delightfully. For her part, Garcia can capture unnameable emotions with each set of phrases she plays. In response an almost-groan goes up from the crowd, then it surges back and forth, cheering itself hoarse.

“How long we got?” she asks. “As long as you want!” someone shouts, prompting her to launch into another album track, “Hold”. This features nifty stickwork by Sam Jones, whose muscular soloing follows the questing interplay between double bass and piano. Garcia’s own solos are tender, fiercely powerful and raw by turns. In the final song, she double-tracks the sax with effects, morphing into the closest to smooth jazz that she gets. At the same time, the music is never less than challenging, with long, fretless bass-like sighs from Casimir, who often creates his own sound worlds within that of the band. It’s also fun: switching tempo to upbeat, then deepening, opening out to a danceable, dub reggae groove, sax floating on top in waves, for which a sea of heads bouncing in unison roar their applause. The players’ individual album projects highlight the fact that each of them is a composer in his own right. Nubya is in good company. With her unique  sound of simultaneous protest and nurturing, she leads a cutting-edge but tremendously giving and generous performance collective.

Peter Gamble - 07 January 2019
On the face of it, this looked like another guest soloist with ensemble release but although Brecker is featured on all the tunes, alternating between his two horns, members...