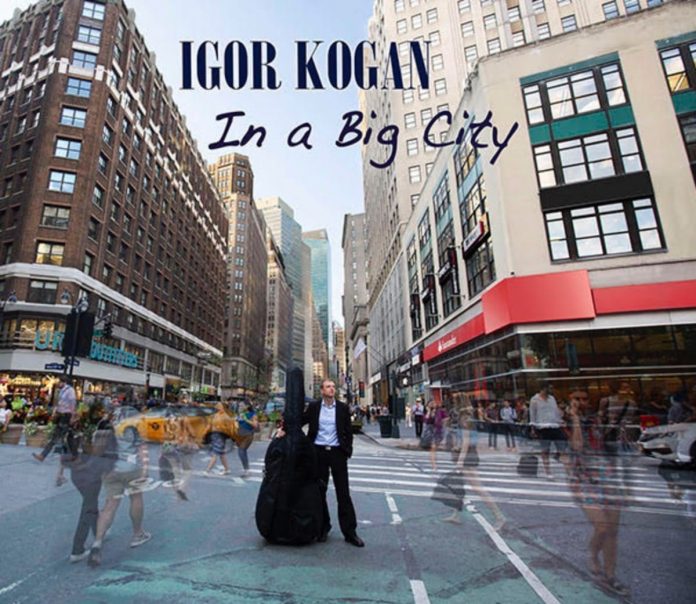 Bassist and composer Igor Kogan shares his personal reflections from the various places he has lived through this debut studio album. He was born in Russia, moved to Israel and now resides in the USA. He presents nine different compositions written over the last nine years and reflecting his time in Los Angeles and New York. Kogan has composed for jazz quintet, featuring special guest Tierney Sutton’s ethereal vocals on the eighth track, Vocalise.

In A Big City opens with Takeoff, which is built around a bass figure, making it cool and funky. It has some beautifully virtuosic saxophone and trumpet playing from Jeremy Lappitt and Joshua Aguiar respectively; Marco Apicella, agile on the keys, provides some exciting piano riffs. Apicella gets more time on Qwerty aka False Start to impress us with his great virtuosity. This second track showcases Kogan’s originality and playfulness. It begins with three false starts, gradually developing more and more before turning into a fast-paced track on the fourth “attempt”, with great intensity.

Illumination adjusts the mood as we are let into a tender, sensitive and gentle conversation between quintet members, specifically Kogan and Apicella. The piano flourishes are a delight and the piece radiates a lulling, calming atmosphere. Kogan cleverly and smoothly moves from Bass Introduction into New York City Blues, the latter showcasing an impressive solo from Lappitt, rich in its bluesy feel. The eighth track, featuring Tierney Sutton, begins with her hovering and clear vocal lines; they blend well with Kogan’s free-flowing bass before Aguiar adds passion with a fiery flugelhorn solo.

This is a dynamic and all-encompassing album, inspired by the effect that new places and big cities have upon us – a fascinating stimulus many will understand.

Randy L. Smith - 18 January 2020
Paul's professional career was interrupted by a stint in the US Army around the end of the 60s. "They sent me to Berlin, and...

Peter Gamble - 14 May 2020
Alto saxophonist Richie Cole bucked the trend in the 70s when he avoided the lure of fusion and decided to give us his own exuberant take on...

Jazz Journal - 02 August 2020
Ian Carr's Nucleus represents one of the better attempts to fuse jazz with the basic rhythm of rock. For...