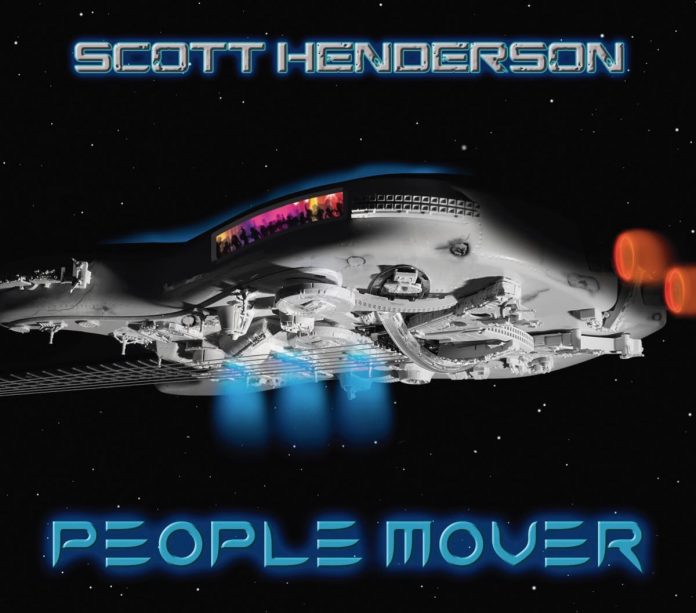 Weather Report looms large among guitarist Henderson’s influences, married to the attitude and sound of Led Zeppelin’s Jimmy Page. WR was particularly evident in Tribal Tech, the band he ran in the 80s and 90s with bassist Gary Willis. But jazz and fashion moved on (or in many cases backwards). Henderson’s own over the shoulder glance took him back to the blues and the largely unmodified Stratocaster. He spectacularly took the genre quite a few steps further forward on such blues-with-changes masterpieces as Dog Party (1994) and Tore Down House (1997).

In subsequent years the Strat (in this case a John Suhr model) has stuck and been combined with the Weather Report tendency, and such it is on this 2019 album. But although Zawinul’s muse might hang over much of the composition, there are no keyboards here, just heavily processed guitar, a bassist who has nailed Jaco Pastorius’s style, and drums. The texture and arrangements are thickened to some degree in places by guitar overdubbing. The compositions can’t be faulted, nor the playing, though the clouds of effects are perhaps superfluous at times, obscuring Henderson’s message. It’s powerful enough to need hardly any dressing apart from distortion and a little delay.

There aren’t any weak compositions, just highlights. Primary Location adds further harmonic twists to WR’s already rich palette plus the kind of guitar acrobatics Henderson brought to the son-of-WR Zawinul Syndicate in the late 80s. Satellite, not the Coltrane tune, morphs into a pacey swinger after a rock-styled intro, Henderson’s tone unusually clean, the lines post-bop. It also, like Primary has a powerful bass solo. As in athletics, it seems that once groundbreaking techniques become the norm in music. Labaye is one in a legion of bass players who’ve mastered Pastorius’s innovations.

The highlight of highlights is probably Syringe, a tune that seems familiar, perhaps from some Tribal Tech manifestation. It’s notable for its furious guitar playing, the Suhr Strat given a good thrashing over a modal backing that allows the lines to stand out clearly. The hooligan mood is intensified by the distortion and/or pitch shifter used on the bass.

Happy Fun-Sing runs Syringe close for intensity. It isn’t the ironic poke the title might suggest. The bright progression and the loping two-feel groove remind of Big Fun from the first Tribal Tech album, Spears (1985), and Henderson tears into it in a particularly bluesy manner that recalls the blues albums. Fawn is a good choice for closer, a very pretty melody over a light Latin beat that winds down the tension.

People Mover might not break any barriers in the way earlier Henderson and TT albums did but followers of Henderson’s pioneering style will want to hear it. He stands with Metheny, Scofield, Holdsworth and one or two others as a beacon of innovation from the last great leap forward in jazz.

Jeremy Isaac - 12 February 2022
Swiss jazz quartet Catmosphere formed in 2017, but has only now released its sparkling debut album. The band is fronted by vocalist Cathryn Lehmann, who released her solo debut...