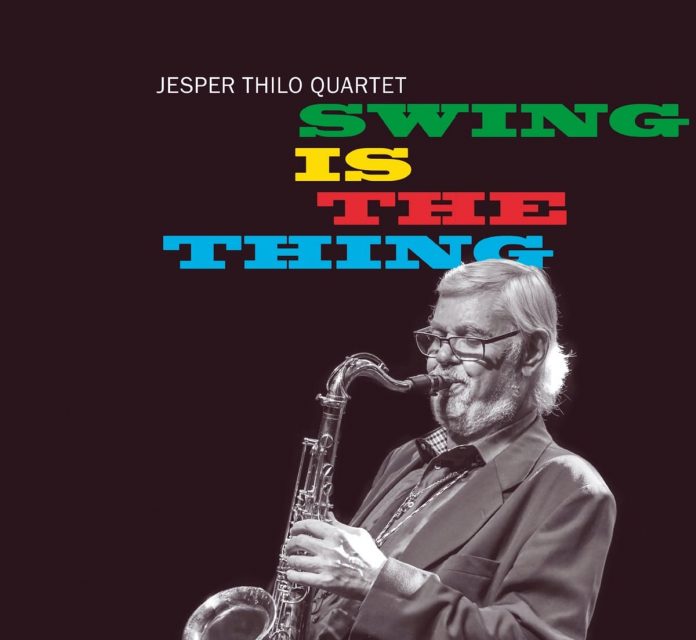 The sound of veteran Danish saxophonist Jesper Thilo unashamedly takes in Coleman Hawkins, Ben Webster, Don Byas and Lester Young but not John Coltrane or Sonny Rollins, let alone Michael Brecker and anyone later than he. He’s a mainstreamer who has also eschewed composition for a reliance on performing standards.

Like many other Europeans, he’s been good enough to be endorsed by visiting Americans such as Roy Eldridge, Clark Terry, Benny Carter and Harry Edison, as well as those among the aforementioned saxists he considers influential. He continues to be a commanding presence after 60 years in the business, from his days with the Arnvid Meyers Orchestra and later the DR Big Band to the tight and light ensemble that features on this album. Swing Is The Thing is also an example of how Thilo’s Scandinavian authority has permeated outwards.

Pianist Søren Kristiansen is one who’s benefited. Thilo recognises his high calibre by allocating him proper solo space, notably on I Can’t Get Started and Nature Boy, the latter spotlighting Thilo on clarinet and the vocals of Thilo’s daughter, Rebecca Thilo Farholt. Kristiansen’s contributions are not just infillings but considered commentaries on the tune sufficient to attract the listener’s special attention.

Bassist Daniel Franck and drummer Frands Rifbjerg play more than conventional roles too, Woody ‘n’ You devolving to a snappy drum feature and Broadway embracing a bass and drums get-together, a bass and sax duet and some final trading with the kit. Franck moves appropriately downstage for Oscar Pettiford’s Swinging Till The Girls Come Home.

Thilo draws on a compendium of licks to underpin his phrasing and momentum. His dependence on standards is not lazy or glib. He gets inside a chart and elegantly plunders its contents before setting them out in polished exegeses.

The longest track is about seven minutes, the shortest 2.53 – but, as it says in the title, the swing’s the thing. For many listeners, it always will be, and without inhibiting developments elsewhere that take jazz on a different route at a different tempo.

There’s often a lot of joy in the singing and piano playing of Diane Schuur. Take the track Everybody Looks Good At The Starting...

Tommy Dorsey liked to have all the “improvised” solos in his numbers concur note-for-note with the originals on his records. One night in the...

Egberto is a good guitarist, a fairly respectable pianist, is beautifully recorded in both roles, but produces not a note of jazz here. Though...

Jesper Thilo Quartet: Swing Is The Thing"He continues to be a commanding presence after 60 years in the business, from his days with the Arnvid Meyers Orchestra and later the DR Big Band to the tight and light ensemble that features on this album"
Advertisement