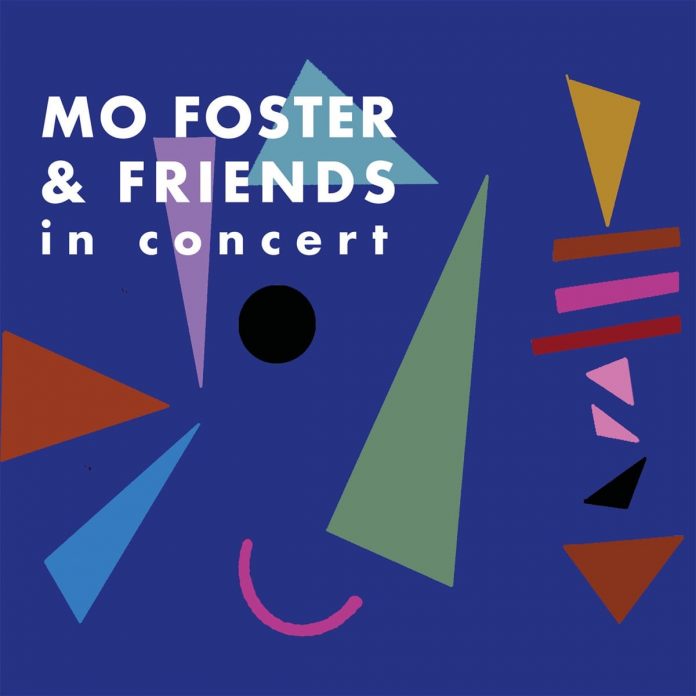 A convoluted chain of events led to the making of this live-in-concert double album. In 2011, bassist Mo Foster was organising a reunion concert in celebration of the 50th anniversary of the University of Sussex where Foster had studied for a physics degree. Whilst visiting nearby Lewes, singer Linda Hoyle, Foster’s former bandmate with jazz rock group Affinity, found out about the gig and joined in for a couple of numbers. That reunion sparked a renewed ambition for Foster and Hoyle to work together again, made somewhat difficult since Foster lived in London and Hoyle lived in Ontario, Canada. But Foster was determined to produce an album for Hoyle which eventually materialised as The Fetch (Angel Air, 2015).

Foster arranged a launch gig for the album in early 2015 at London’s Pizza Express Jazz Club but two weeks before the show Hoyle called him to say she was so ill she couldn’t make the concert. Having assembled and rehearsed a star cast of musicians Foster was faced with the choice of either cancelling or continuing with an instrumental set. He opted for the latter. The gig was a resounding success and resulted in a series of Mo Foster & Friends concerts over the next five years. Thankfully, Foster had the foresight to record the gigs and selected the best tracks from the repertoire to appear on this album.

It should be self evident that the musicians involved are some of the very best players in the UK. Foster and virtuoso guitarist Ray Russell, his longtime bandmate from fusion trio RMS, played together with Gil Evans as witnessed on the album Gil Evans ‎– The British Orchestra (Mole Jazz, 1983). Reedsman Chris Biscoe has been the mainstay of countless iterations of Mike Westbrook’s bands and Jim Watson has played with a huge swathe of famous names including Sting, James Moody, Herb Geller and Jean Toussaint.

In addition to the unsurprisingly excellent musicianship and superb recording quality, the album sports an eclectic mix of familiar compositions and some originals. Of the non-originals, there are several which acknowledge Foster’s association with Evans – The Pan Piper from Sketches Of Spain (Columbia, 1960), Gershwin’s Gone, Gone, Gone and Evans’ Gone from Porgy And Bess (Columbia, 1959) and Evans’ Hendrixian favourite Little Wing replete with Russell’s soaring, ethereal guitar lines.

There are, most gratifyingly, two numbers by Mike Gibbs from his eponymous debut album (Deram, 1970). Gibbs’ terrific, memorable tunes are too rarely heard and are here given sumptuous arrangements they richly deserve. Russell actually appeared on the Gibbs album and it’s hard to believe these timeless compositions were recorded all of 50 years ago. Another link to Russell is found on the opening number on CD2, Wayne Shorter’s Footprints, which was coincidentally the first track on Russell’s debut album Turn Circle (CBS Realm,1968). Here it’s given a gorgeous reading enhanced by Biscoe’s serpentine alto clarinet.

Two Foster originals previously appeared on his solo albums. The exuberant Oh No, opening with an uber-funky bass-guitar solo, was first heard on Bel Assis (MMC, 1988) whilst the sensitive ballad So Far Away was previously released on Live At Blues West 14 (Angel Air, 2006). The album’s closer is the only one not recorded live, but was painstakingly constructed via home studios during the Covid-19 lockdown in 2020. This is bassist Steve Swallow’s Chickens which originally appeared on Gary Burton’s album Throb (Atlantic, 1969). The background to that choice of track dates back to 1969 when Affinity supported the Burton Quartet at Ronnie Scott’s. Foster noted Swallow’s double-bass playing, especially on this tune. It was actually slated for his Friends Pizza Express set that was cancelled due to lockdown. Determined to have it heard however, Foster included it on this album. He sent a copy of the recording, via Mike Gibbs, to Swallow and was delighted to receive a note from the bassist which concluded “…I loved it. You sound great! You all play beautifully together. But my appreciation goes most especially to you, for singing out that melody with such strength. Made my day”.

Swallow’s effusive and justifiable praise pretty much sums up the whole of this excellent, gratifyingly rewarding album.

Nic Jones - 16 February 2021
With this one it's clear from Tetrahedron onwards that there's some serious musical business going on, and while it's usually far from easy to convey that immediately, this quartet...