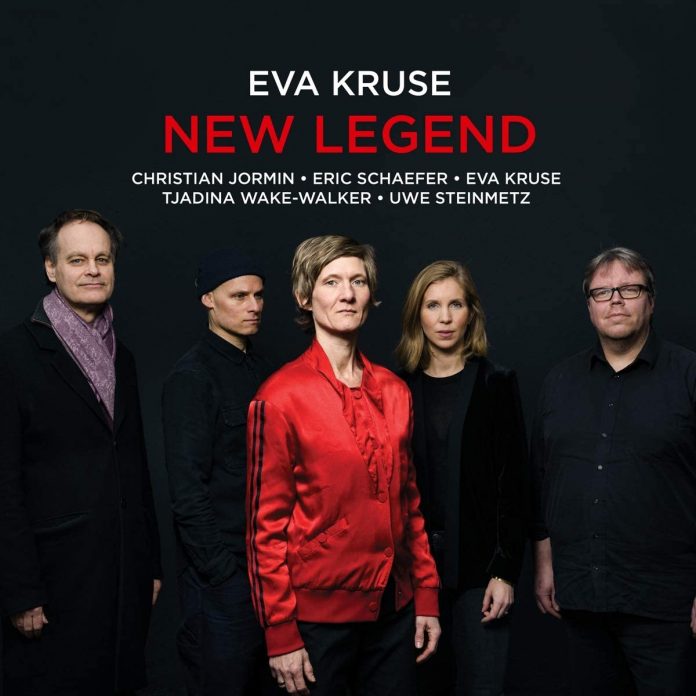 As co-founder of one of the best European piano trios to follow E.S.T., Eva Kruse should be better known. Leaving [em] in 2011 to have a second child, Kruse resumed her career in 2014 with a new album, In Water (Redhorn), and a musical new direction. Revealing rather more composerly interests than did the heavily groove-based trio, In Water was quickly followed up with On The Mo in 2016, andKruse’s achievements were recognised with Jazz-Echo awards for top German bassist in 2015 and 2017.

Whenever I hear the oboe in jazz I think of Paul McCandless, and his early Vanguard and ECM recordings are certainly written into this group’s musical DNA. The timbres of the two very different reed instruments don’t so much contrast as shadow one another, creating a particular feel which is perfectly at home in Kruse’s chamber worlds.

It was recorded in Gothenburg just before Europe entered lockdown. Kruse’s hope is that the work’s title New Legend will be interpreted as a “new story”. Underlining her belief that music should always reveal something of the inner self, this is music that draws heavily on Kruse’s lived experience. Take the bittersweet Lifesaving Day for example, a piece which channels the hope and despair of her experiences of taking refugees into her home.

The wonderfully unspooling movements of the opening track build outwards from a rather inward looking motif, transitioning into a memorable and quite buoyant main theme. Steinmetz really digs in, before space then opens up for Kruse to take a typically virtuosic solo. Passacaglia plays with the old form, evidencing Kruse’s personal and professional interest in baroque music (see 2013’s New Eyes On Baroque). It serves as something of an interlude before Små Diameter I Ett Vattenfall captures the dancing movement of falling water. Still On The Mo stands apart with its earthy gospel feel, but it is Pendel that is probably my favourite track. As Kruse carries the folksy almost hymnal melody, nudged all the while by Schaefer’s sympathetic percussion, not a note seems out of place.

This is a beautifully nuanced album in which the strength of Kruse’s compositions is matched by the sensitivity of the soloists; it shows a very distinctive group maturing nicely.

John Coltrane’s A Love Supreme is one of the unassailable heights of jazz, revered for its spiritual intensity and incantatory devotion but rarely played...
Read more
Audio Reviews

Cedric Caillaud and his little group take an intimate look at some of the less familiar classics from Antonio Carlos Jobim’s extensive songbook. Known as...
Read more
Audio Reviews

Australian-born vocalist Gemma Sherry has been resident in NYC and Philadelphia since 2010, and studied vocal improvisation at the New School under Billy Harper. In...
Read more
Audio Reviews

Although the title of this CD implies this is a release by the long-established Jazz Bigband Graz, a quick glance at the personnel shows...
Read more
Audio Reviews

Judging by its title and the cover photo depicting Newcomb and his bass playing son Jake, the main sales pitch of this release is...
Read more
Audio Reviews

Most if not all of the titles on this compilation have been issued on various CD sets, including the excellent 2002 Proper Box anthology...
Read more
Audio Reviews

If there is one thing that jazz fans are probably missing most of all during the current pandemic, it is the ability to go...
Read more
Advertisement

I described Dahlen’s 2018 album Clocks as “a dark musical hinterland of quite stunning beauty” and having lived with it for a couple of...
Read more
Audio Reviews

Hunstville was established in 2006 and its epic post-rock soundscapes take in a very catholic range of influences. From the skewed dustbowl Americana of...
Read more
Audio Reviews

I had the pleasure of seeing Rymden perform several times in 2018-19. At that stage their debut album Reflections And Odysseys had been recorded,...
Read more
Audio Reviews

Alexandra Grimal & Benjamin Lévy: The Monkey In The Abstract Garden

This is a very different proposition from last year’s Nāga, a stunning work for septet which blurred the boundaries between composition and improvisation. The...
Read more
Audio Reviews

Swiss-born percussionist and composer Martin Perret is a fixture on Berlin’s creative and improvised scenes, and L’Anderer ("other") is his main artistic outlet. Exploring...
Read more
Audio Reviews

By my reckoning this is Vancouver-based guitarist and oud player Gordon Grdina’s third release of the year, coming hot on the heels of albums...
Read more
Audio Reviews

Those who have followed Lötjönen’s career will know that he is no stranger to the studio. Having risen to international prominence with the Five...
Read more
Audio Reviews

Widely touted on his arrival as a superstar in the making, the 23-year old guitarist made a a hugely impressive debut with 2017’s Riser....
Read more
Audio Reviews

Without the cello of Vito Stano, Raf Ferrari’s combo could be just another gifted post-E.S.T. trio. Together for over a decade now, the group...
Read more
Audio Reviews

Per Oddvar Johansen: The Quiet Cormorant

Perhaps best known for his work with Trygve Seim and The Source, percussionist and composer Per Oddvar Johansen has been a feature of the...
Read more
Audio Reviews

Anybody hearing bassist Sigurd Hole performing with Tord Gustavsen, Jon Eberson or Karl Seglem will surely recognise his tasteful virtuosity. Yet not even his...
Read more
Audio Reviews

Despite being drawn to Tzur’s earlier Enja releases by Shai Maestro and Ziv Ravitz, I nevertheless found something very arresting in the saxophonist’s considered...
Read more
Audio Reviews

Sharing their name with a popular shopping mall in suburban Stockholm, Nacka Forum have been practising a slightly madcap brand of free jazz for...
Read more
Audio Reviews

Following their brilliant 2018 Edition Records debut, Ascent marks something of a departure for the Pablo Held trio in as much as it introduces...
Read more
Audio Reviews

Reviewing Obara’s 2018 ECM debut Unloved was one of the unexpected pleasures of the last decade. Here was an artist steeped in the music...
Read more
Audio Reviews

I don’t think it would be unkind to describe 77-year old David Friesen as an under-sung giant of the post-bop era. Adding his considerable...
Read more
Audio Reviews

This Danish-German quintet can trace its roots back to a visit to Cologne made by pianist Jacob Anderskov at the invitation of Helm and...
Read more
Advertisement

Yet another name to add to the roster of “jazz singers” is the London-based Juliet Wood, who has assembled an interesting array of tunes...

The New Orleans trombonist rejects the fashionable late idea, beloved of the fonder critics round here, that Europe is now the focus of jazz invention

After listening to the Ornette Cole­man disc reviewed above this sounds like a slice of traditionalism! But Monk can get far out, too, and...