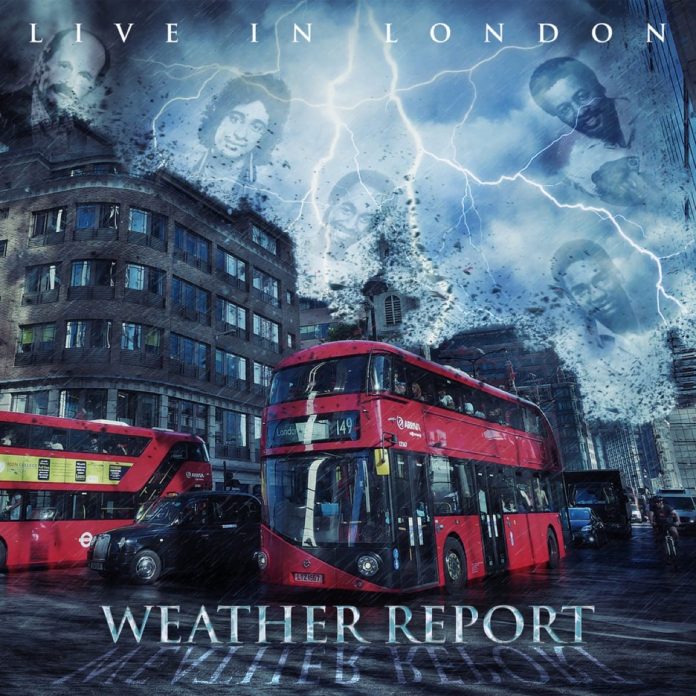 Recorded with good, full and bright sound, Live In London comes from the tail-end of the saga that was Weather Report (1971-1986). It features material from the 1980 Night Passage (Fast City), the 1983 Procession (Where The Moon Goes) and the 1985 Sportin’ Life (Corner Pocket) plus a piece new to me, Unknown: I have given the spelling offered in the accompanying press release rather than the Unkown [sic] printed on the CD sleeve. It’s a potent, slow-building burner, a questing yet deeply grounded rubato meditation of some 13 minutes, with Shorter on tenor, and offers perfect complementary contrast to the up-and-burning City and Pocket.

Some critics and listeners can get a touch sniffy about parts of the WR saga, especially the albums of the late 1970s and the final years as documented here. Those who relish the early group improvisations of the Live In Tokyo 2-CD set from 1972, or the fluid storytelling magic of the mid-1970s Mysterious Traveller, Tale Spinnin’ and Black Market, can feel that the commercial success of 1977’s Heavy Weather (featuring Birdland) and 1978’s Mr Gone marked a severe creative decline – only remedied by the zest and drive of the subsequent group with Jaco Pastorius and Peter Erskine (documented on 8.30, Weather Report, Night Passage and The Legendary Tapes: 1978-1981). And when that group broke up, some WR enthusiasts could only lament what they saw as a second marked decline with the release of Procession, Domino Theory (1984), Sportin’ Life and the final This Is This (1986 and as yet unissued on CD).

Live In London suggests that the truth is a bit more complex. Bailey, Hakim and either Cinelu or Rossy made for a fresh and formidable rhythm section, with Bailey’s spot-on economy and deep groove gelling potently with the full-on Hakim, and Cinelu and Rossy supplying appropriate colour and texture where needed. Zawinul and Shorter retained their magic to the end, as can be heard in the first three tracks here and which alone make this release essential listening for any WR devotee.

The band often featured the staggered rhythms and liquid trigger releases of Where The Moon Goes – the piece which Manhattan Transfer, who performed it on Procession, deemed the hardest piece they’d ever sung. You can hear it (without Manhattan Transfer) on the 1983 two-CD Live In Cologne and the 1984 Live In Tokyo, reissued on DVD as Weather Report: A Musical Documentary – and there are several further versions on YouTube.

The cut here is not the finest: it’s overlong and the vocals are a touch underwhelming, especially when compared with the June 1983 London Hammersmith performance available on the Live And Unreleased two-CD setwhich was issued in 2002. But don’t let that put you off investigating what is chiefly a cracking sample of late-period WR.

Weather Report: Live In London is issued for the first time ever on CD through Angel Air / Store For Music – thestoreformusic.com

Bassist and composer Igor Kogan shares his personal reflections from the various places he has lived through this debut studio album. He was born...

Before being recognised as a songwriter of uncommon originality Dave Frishberg had served time in the fast-lane of the jazz world accompanying Carmen McRae,...

While not many things are certain in this life, I know that everyone reading this has heard the voice of Jimmy Bryant, even if...

These two publications are part of a new series of 10 books (in PDF form) from Sher music, featuring the music of 10 jazz...

Two outstanding musicians do not always make a good duo combination. Here they do. The only adverse comment one must make is that such...

"Zawinul and Shorter retained their magic to the end, as can be heard in the first three tracks here and which alone make this release essential listening for any WR devotee"Michael TuckerWeather Report: Live In London
Advertisement