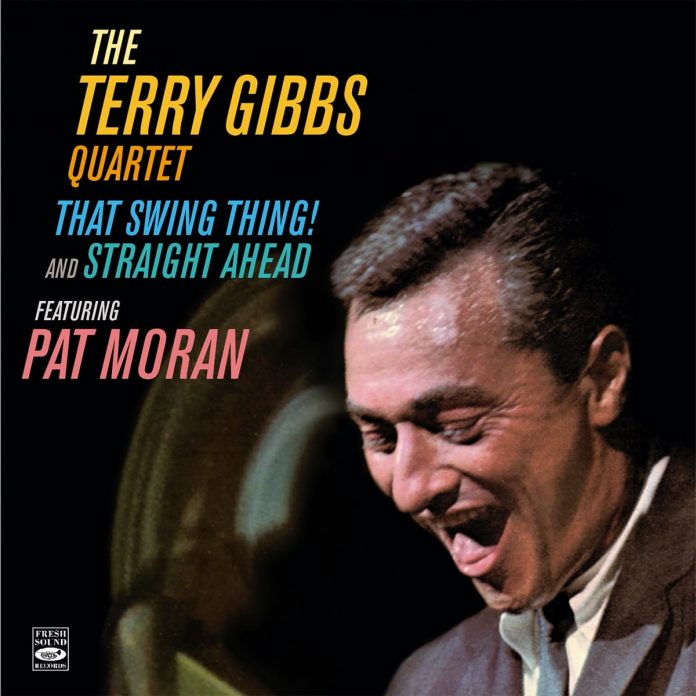 Whether leading his various quartets or the superlative Dream Band, Terry Gibbs (now 96 and still playing and recording) never fails to deliver exciting and immaculate performances. He also communicates this excitement and pleasure to his musicians with a stream of just-audible grunts and colourful exhortations and comments.

These two albums originally appeared on the Verve label, and it’s good to have them back in CD format. On both of these live dates, Gibbs featured pianist Pat Moran – who was also in two of the Dream Band (also live) 1961 sessions, retitled Main Stem and The Big Cat.

Born in Oklahoma in 1934, Moran studied at Phillips University and the Cincinnati School of Music, and began her career as a concert pianist, but later moved to jazz. She performed with a quartet at Birdland in 1957, released a trio album with Scott La Faro on bass and Gene Gammage on drums, and recorded with Mel Tormé and Oscar Pettiford. When Gibbs was looking for a pianist to replace Terry Pollard, he heard Moran play in a Chicago club and recalled that she “had everything I was looking for that I usually have in my quartet”. He promptly invited her to join him in California (where she and her young son lived with him and his then-wife).

Moran enjoyed the short time she spent with the quartet and Dream Band (despite having some difficulty reading the charts), and recently (and ambiguously) reflected that “playing with Terry was quite an experience”. They have remained good friends ever since. In the early 1980s she released an album (with a companion book) of children’s songs; in 2018 she was inducted into the Oklahoma Jazz Hall of Fame.

That Swing Thing! opens with a fast-paced and retitled version of the spiritual Let My People Go, with Gibbs and Moran immediately establishing an exhilarating rapport, ably backed by Bond on bass and Frommer on drums. The Bobby Timmons composition Moanin’ receives a propulsive performance, with Gibbs playing behind the beat and then riffing behind Moran’s solo. Stella By Starlight is taken at a surprisingly upbeat tempo, but is none the worse for that. Three Blind Mice – which Gibbs jokingly claims as his own composition – is played in 3/4 time, with vibes and piano hammering out the familiar tune, with bespoke support from Bond and Frommer. Gibbs can be heard encouraging Moran who responds with obvious delight and impressive dexterity. Blue Wednesday (a genuine Gibbs composition) features slow tempo solos from the two principals, with the rhythm section playing in half time. The set ends with another Gibbs original, Mannehole March, a shuffle-beat semi-gospel tune, with Gibbs again encouraging his compatriots to keep swinging – and they comply.

A studio session, Straight Ahead, was recorded a year later, and with another rhythm section. On Hippy Twist and C.C. Blues (both Gibbs compositions) Moran makes her debut on organ, turning in creditable performances, with Terry’s gently prompting and complementary vibes. The best track is a thoughtful reworking of On Green Dolphin Street, with crisp brush work from Mike Romero. The ballads Memories Of You and You Go to My Head receive gently swinging and respectful – but not over-sweet treatments. If not quite up to the quality of That Swing Thing! the Straight Ahead date delivers what it says on the tin. That said (and partly retracted) this is a superb reissue, and deserves more than honourable mention.

Find out more about The Terry Gibbs Quartet: That Swing Thing! & Straight Ahead: Featuring Pat Moran and buy it at freshsoundrecords.com.

Previous articleJohnny Letman: The Four Faces Of Johnny
Next articleVarious: Underground London – The Art Music And Free Jazz That Inspired A Cultural Revolution

Kjetil Mulelid Trio: Who Do You Love The Most?

As is apparent from the words of several writers quoted in the accompanying 20-plus-page booklet, Dakota Staton covered a wide stylistic range and this...

This piece was written for Jazz News, where it appeared in 1962. Times were different then, and I have let the original essay be....

When Dizzy Gillespie heard that Clifford Brown had been killed in a 1956 car accident his shocked reaction became an emotional epitaph: “Jazz was...

This LP presents the same personnel as did Ornette's 'New York Is Now' album, and was possibly recorded around the same time, i.e. sometime...

The Terry Gibbs Quartet: That Swing Thing! & Straight Ahead: Featuring Pat Moran"Terry Gibbs (now 96 and still playing and recording) never fails to deliver exciting and immaculate performances ... this is a superb reissue, and deserves more than honourable mention"
Advertisement