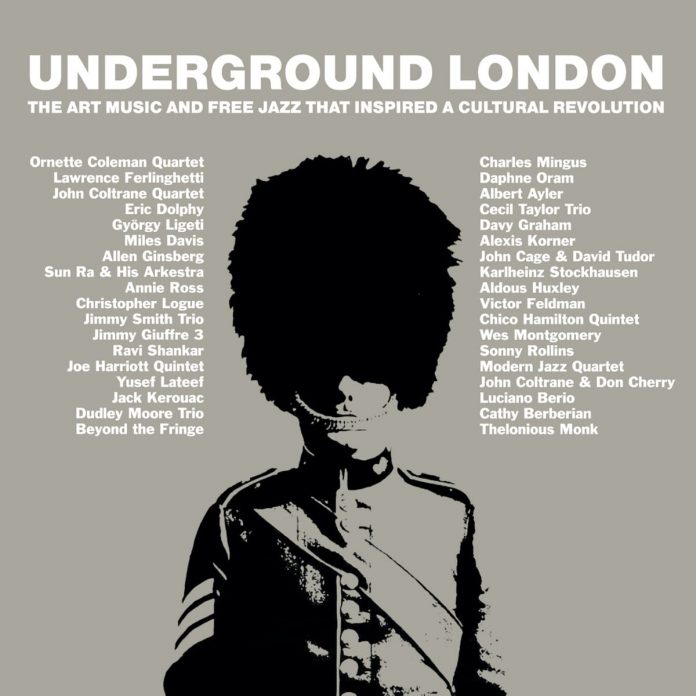 The counter culture of the 1960s had varied origins and this three-CD box set proffers an interesting and individual perspective on its musical and literary influences.

Britain in the late 50s was emerging from post-war austerity. With the proliferation of nuclear weapons and the rise of CND, the first seeds of the UK’s underground movement were sown. The Aldermaston peace marches kindled the emergence of a new youth culture and as we moved into the 60s radicalised young people began to assess the fabric of society as a whole.

A loose collective of London-based radicals began to promote alternative life styles from which later sprouted developments emblematic of the underground such as the International Poetry Incarnation at the Albert Hall, the psychedelic UFO club and the International Times newspaper.

With this background, Underground London provides an interesting cocktail of the words and music that helped to influence those who created the art and sounds of the later 60s. It’s interesting to note that all the tracks in this box set were recorded between 1956 and 1962 apart from one in 1952. It reflects the fact that unlike today when music is almost instantly accessible on the internet, the 60s were times when non-mainstream music in particular could take months if not years before reaching the user.

The counter culture was not all London based, of course. The underground in the UK drew inspiration from the American beat poets such as Allen Ginsberg, Lawrence Ferlinghetti and Jack Kerouac. These political dissidents helped spearhead the reaction against materialism and conformity. “Live” extracts from their works rub shoulders in the set with the likes of electronic music pioneers Karlheinz Stockhausen and Daphne Oram, avant-garde composers such as Gyorgy Ligeti (his Atmospheres was used later by Kubrick in 2001: A Space Odyssey), Aldous Huxley’s extract on mind expanding chemicals, and India’s spiritual music as embodied by Ravi Shankar.

There are many other players in this heady mix but the majority of tracks are jazz records of the time. Free jazz pioneers such as Albert Ayler, Ornette Colman and Cecil Taylor lead the charge. There’s also Eric Dolphy, John Coltrane, Wes Montgomery, Jimmy Giuffre, Joe Harriott, Victor Feldman and Annie Ross with the Tony Kinsey Quintet amongst others.

An absorbing booklet accompanying the set has detailed track and artist notes together with comments and anecdotes from those involved in the alternative scene at the time.